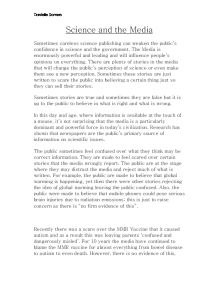 Science and the media

Science and the Media Sometimes careless science publishing can weaken the public's confidence in science and the government. The Media is enormously powerful and leading and will influence people's opinions on everything. There are plenty of stories in the media that will change the public's perception of science or even make them see a new perception. Sometimes these stories are just written to scare the public into believing a certain thing just so they can sell their stories. Sometimes stories are true and sometimes they are false but it is up to the public to believe in what is right and what is wrong. In this day and age, where information is available at the touch of a mouse, it's not surprising that the media is a particularly dominant and powerful force in today's civilization. Research has shown that newspapers are the public's primary source of information on scientific issues. The public sometimes feel confused over what they think may be correct information. They are made to feel scared over certain stories that the media wrongly report. The public are at the stage where they may distrust the media and reject much of what is written. For example, the public are made to believe that global warming is happening, yet then there were other stories rejecting the idea of global warming leaving the public confused. ...read more.

The MMR fear is a myth that was created by one doctor who has now become a victim to the media who are ravenous for headlines. The the media are still leaving Parents in fear over the vaccine with no real firm scientific evidence. The claims that the media make about the vaccine are not necessarily true and they know this. This story would be more justified if more unbiased research was done on it, although research which is generally biased has already been carried out on the matter. The selective reporting of these cases promotes nothing but a myth which only places children at risk. The headline of the story which is "New fear over MMR link with rising autism" suggests that there may be some evidence that is linking the MMR jab with autism but when reading the story I find nothing, no truth evidence or facts, just a very biased one sided scare story. This is the kind of story that makes the public distrust the media as the story is totally unjustified. The purpose of this story is to exploit the fears of the public. The way the story reported the science behind the MMR jab is very inaccurate. There are a lot of theories on what exactly is causing global warming and because there are so many theories it makes it harder to believe which one or if any are true. ...read more.

This is a very negative contribution to the public's perception of science. The public at first may believe these scare stories and make decisions based on them. The Medias reporting of science is very often inaccurate and not always seen as true. They tend to dumb the stories down so they think that the public will understand them while underestimating the public's knowledge of science by using non-technical and non-scientific words. They often report things that are false and this is what makes the public distrust the media a lot as they have no idea what to believe and so the media play with their minds and tend to try and convince the public to believe what they believe. The way that the media select and present their stories never will lead to a truthful depiction of the world's scientific events. The impacts of the issues the media write about are sometimes looked upon differently by different people in society and the media are aware of this. The media are not going to change their ways because it seems this is what people want else the medias papers would not sell. There is also a lot of restrictions on what the media report by the governments and politicians and this stops much coming to light so the media make the best with what stories they do have. If the public stopped buying the papers due to the lack of trust, the media may change their ways. ...read more.