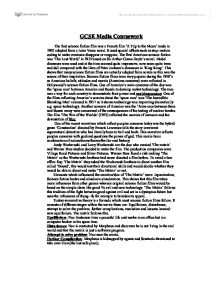 GCSE Media Coursework The first science fiction film was a French film 'A Trip to the Moon' made in 1902 adapted form a Jules Verne novel. It used special effects such as stop-motion cutting to make creatures disappear or reappear. The first American science fiction was 'The Lost World' in 1925 based on Sir Arthur Conan Doyle's novel. Model dinosaurs were used and at the time seemed quite impressive, now seem quite tame and dull compared with the likes of Peter Jackson's dinosaurs in 'King Kong'. This shows that many science fiction films are actually adapted from novels as this was the source of their inspiration. Science fiction films were very popular during the 1950's as Americas beliefs, attitudes and morals (Americas concerns) were reflected in Hollywood's science fiction films. One of America's main concerns of the day was the 'space race' between America and Russia to develop rocket technology. The race was a way for each country to demonstrate their power and world supremacy. ...read more.

Elements which influenced the creation/idea of 'The Matrix' were: Japanimation, Science fiction books and simulacra simulcration. This shows that this film takes more influences from other genres whereas original science fiction films would be based on the simple ideas like good Vs evil and new technology. 'The Matrix' follows this tradition of the fight between good against evil and set in a dystopian future but uses the influences of Kung -fu for example to broaden its appeal. Todorovs narrative theory is a formula which most science fiction films follow. It consists of different stages within the movie these are: Equilibrium, disturbance, attempt to solve the problem, further complications, resolution and lessons learned: new equilibrium. The matrix follows this. Equilibrium: Neo Anderson lives a peaceful life and works in an office but is a computer hacker in his spare time. Disturbance: Neo is contacted by Morpheus and discovers he is not living in the real world and that the matrix is just a software program. ...read more.

Other factors that made 'The Matrix' successful is that the creators use authentic ideas e.g. our 'real world' is actually a software program an enigma is created as we wonder to ourselves 'are we actually living in the matrix'? Also the digital/special effects the Wachowski brothers use e.g. slow motion; Kung-fu etc. are used to appeal to a younger adult audience as more teenagers tend to like more action films, whereas the complex parts of the matrix may be aimed to an older audience. Another camera technique used in 'The Matrix' for the first time is called 'Bullet time photography'. This technique was devised by John Gaeta. This is where the passage of time is displayed as extremely slow in order to allow a viewer to observe fast events (such as flying bullets). The impact of this technique was so great that other films began to use it for example: Scary Movie Cindy dodges attacks and deals a flying kick to the masked killer. The masked killer also hurts his back when imitating Neo's dodges on the rooftop in 'The Matrix'. By Kiefer Rendall ...read more.