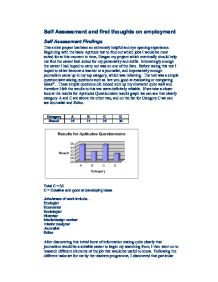 Self Assessment and first thoughts on employment

Self Assessment and first thoughts on employment Self Assessment Findings This entire project has been an extremely helpful and eye opening experience. Beginning with the basic Aptitude test to find out which jobs I would be most suited for at this moment in time, I began my project which eventually should help me find the career best suited for my personality and skills. Interestingly enough the career I had hoped to carry out was on one of the lists. Before taking this test I hoped to either become a teacher or a journalist, and impressively enough journalism came up in my top category, which was relieving. The test was a simple questionnaire asking questions such as 'are you good at evaluating or comparing ideas?'. These simple questions did indeed sum up my character quite well and therefore I felt the results to this test were definitely reliable. If we take a closer look at the results for Aptitudes Questionnaire results graph we can see that clearly category A and C are above the other two, and on the list for Category C we can see Journalist and Editor. ...read more.

When searching the internet I found a more biased view of Journalism as a great career which although helpful did not give me a balanced argument for giving this career a thought, as it was dressed up to look glamorous ignoring the hard work and difficult hours. Although it may seem like an obvious perk of the job, I didn't realise how likely it is that as a journalist one would travel around the country/world to get different stories, but at the same time have a stable base in an office where the task of writing can be carried out. These fundamental facts had never crossed my mind whilst thinking of becoming a journalist, and finding out these did change my opinion on journalism, a career, rather than a dream. Odyssey however, did give information on the irregular hours and the hectic busy schedules held by most journalists leaving little time for hobbies or other such time using activities. Also, it is interesting to look through the internet, as specific generalisations were made about journalists as being the paparazzi who forcefully stir and twist different images to damage the reputation of celebrities, which is not fair considering there are few journalists who would go to such lengths to write an up to date story. ...read more.

Also, it is good to see that this website hosts a job advertisement section just for Journalists to browse through and this would indeed help an up and coming journalist to find a job. Although I am still not certain that Journalism is my set career, and as visible in the searches I made, I would still consider teaching as an option, I feel much more informed about journalism, and can give credible consideration to it as a career rather than just as a dream. It is amazing that with such a small amount of time such a large amount of information can be found out about a career such as journalism and although it seems like a short-term career, from the information discovered in this project I feel that I could base my main career in journalism. However, with the other information also found out about teaching, if I felt uncomfortable with the lack of timetable with journalism, I could consider teaching as a career in later life, as this is also a possibility. I feel this project has been a huge eye opener and has helped me feel much more comfortable with my future plans which are now blossoming. ...read more.