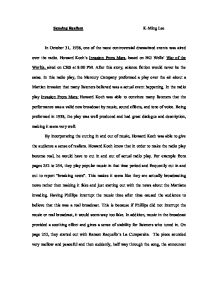 Sensing Realism K-Ming Lee In October 31, 1938, one of the most controversial dramatized events was aired over the radio. Howard Koch's Invasion From Mars, based on HG Wells' War of the Worlds, aired on CBS at 8:00 PM. After this story, science fiction would never be the same. In this radio play, the Mercury Company preformed a play over the air about a Martian invasion that many listeners believed was a actual event happening. In the radio play Invasion From Mars; Howard Koch was able to convince many listeners that the performance was a valid new broadcast by music, sound effects, and tone of voice. Being preformed in 1938, the play was well produced and had great dialogue and description, making it seem very well. By incorporating the cutting in and out of music, Howard Koch was able to give the audience a sense of realism. Howard Koch knew that in order to make the radio play become real, he would have to cut in and out of actual radio play. ...read more.

On page 254, Phillips arrives at Grover's Mill to give a first hand interpretation of what is going on. In the background while he is there, you can constantly hear the crowd screaming and oohing and ahhing and also the sirens of the police. By hearing the audience around the space capsule, you can listen to how they react to different things happening. The police sirens tell the listeners that something is wrong. Whenever you hear police sirens, the first thing you would probably think about would be a crime. This shows that something was wrong at Grover's Mill. You would think this because of the crowds frantic reactions to the capsule opening and also because of the sirens from the police. This shows that there are actually people witnessing the event making the audience think that it is very real. Howard Koch is able to use sound effects effectively again on page 262, where the observer and officer and calculating the degrees to shoot the Martians. ...read more.

They begin conversing and you see a part where it says [Nervously]. A bird flies through the air and the stranger became very nervous because he thought it was a Martian. This shows that they are really worried about the Martians invading their area and killing them. This is because if he weren't nervous, he wouldn't sound frantic and desperate. As a result, by using different tones in the voice actor's voices, the audience was able to relate with the situation. In "Invasion from Mars" Howard Koch made the story sound very real by using sound effects, descriptive dialogue, and also tone of voice. We should all pay tribute to this radio play because this play started the whole sci-fi fiction fantasies that we all like, Such films like Independence Day, Mars Attack, and Star Trek are all very like this movie. In this play, the audience actually believed that they were actually being invaded by mars, which would be pretty scary. By reading this story, we were able to understand how to show realism in different stories. ...read more.