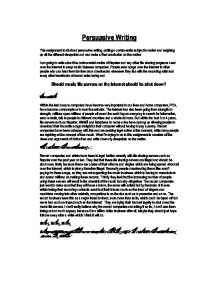 Should music file servers on the Internet should be shut down?

Persuasive Writing This assignment is all about persuasive writing, putting a controversial subject in matter and weighing up all the different viewpoints so I can make a final conclusion on the matter. I am going to write about the controversial matter of Napster and any other file sharing programs used over the Internet to swap music between computers. People send songs over the Internet to other people who can hear them for free once downloaded whenever they like with the recording artist and every other benefactor of record sales losing out. Should music file servers on the Internet should be shut down? Introduction Within the last decade computers have become very important to our lives and home computers, PC's, have become commonplace in most households. ...read more.

Record companies have been unhappy with this and are seeking legal action at the moment, while many people are rejoicing at the concept of free music. What I'm trying to do in this assignment is consider all the views and arguments of both sides and write down my viewpoints on the matter. The downfall of the record industry?! Record companies and artists have been in legal battles recently with file sharing servers such as Napster over the past year or two. They feel that these file sharing servers are illegal and should be shut down, firstly because these are copies of their albums and singles which are being spread about all over the Internet, which is piracy therefore illegal. ...read more.

The record business sees this as a major threat to them, even more than radio, which could be taped off but never had such an impact such as the Internet. They are trying their hardest legally to shut down the music file servers. I don't really believe why the record companies are taking it so far, I don't see them losing out so much anyway because it is a billion dollar business after all. Maybe they should just hope it fades away after a while which I think it will do. Money, Money, Money Many people disagree with the record companies when they say its 'the downfall of the music industry' because they feel that ...read more.