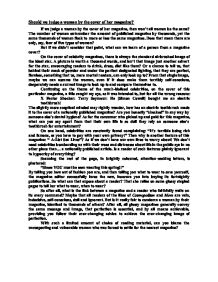 Should we judge a woman by the cover of her magazine?

Should we judge a woman by the cover of her magazine? If we judge a woman by the cover of her magazine, then won't all women be the same? The number of women outnumber the amount of published magazine by thousands, yet the same thousands of women flock to more or less the same magazines. Does that mean there are only, say, four of five types of women? But if we didn't consider that point, what can we learn of a person from a magazine cover? On the cover of celebrity magazines, there is always the standard airbrushed image of the ideal star. A picture is worth a thousand words, and isn't that image just another advert for the star, encouraging readers to drink, dress, diet like them? ...read more.

The slightly more sceptical minded may rightly wonder, how has an electric toothbrush made it to the cover of a nationally published magazine? Are you honestly "shocked" in any way by someone else's dental hygiene? As for the consumer who picked up and paid for this magazine, what can you say apart from that their own life is so dull they rely on someone else's toothbrush for entertainment? On one hand, celebrities are constantly found complaining: "It's terrible being rich and famous, as you have to pay with your own privacy!" Then why is another feature of this magazine: " A-List s*x Lives"? As if we don't have our own lives to worry about! We don't need celebrities bombarding us with their woes and distresses about life in the public eye in no other place than... ...read more.

So what can that expose about a reader? That she relies on some glossy stapled pages to tell her what to wear, when to wear? So after all, what is the link between a magazine and a reader who faithfully waits on its every command? Maybe that all readers of the likes of Cosmopolitan and More are vain, indecisive, self-conscious, dull and ignorant. But is it really fair to condemn a woman by their magazine, identical to thousands of others? After all, all glossy magazines generally convey the same message and image, that perfection is essential, and by all means achievable, providing you follow their ever-changing advice to achieve the ever-changing image of perfection. With such a limited amount of choice of reading material, can you blame the unsuspecting and vulnerable woman who was forced to settle for the nearest magazine? ...read more.