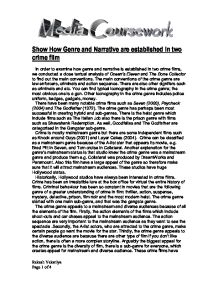 Show How Genre and Narrative are established in two crime film

Show How Genre and Narrative are established in two crime film In order to examine how genre and narrative is established in two crime films, we conducted a close textual analysis of Ocean's Eleven and The Bone Collector to find out the main conventions. The main conventions of the crime genre are law enforcers, criminals and action sequence. There are also other signifers such as criminals and etc. You can find typical iconography in the crime genre; the most obvious one is a gun. Other iconography in the crime genre includes police uniform, badges, gadgets, money. There have been many notable crime films such as Seven (2000), Paycheck (2004) and The Godfather (1972). The crime genre has perhaps been most successful in creating hybrid and sub-genres. There is the heist genre which include films such as The Italian Job also there is the prison genre with films such as Shawshank Redemption. As well, Goodfellas and The Godfather are categorised in the Gangster sub-genre. Crime is mostly mainstream genre but there are some independent films such as Knock around Guys (2001) and Layer Cakes (2004). Crime can be classified as a mainstream genre because of the A-list star that appears its movie, e.g. Brad Pitt in Seven, and Tom cruise in Collateral. Another explanation for the genre's mainstream status is that studio knew the crime genre was a mainstream genre and produce them e.g. Collateral was produced by DreamWorks and Paramount. Also this film have a large appeal of the genre so therefore make sure that it will attract mainstream audiences. ...read more.

According to Todorov's narrative theory, each film should follow a particular order. Equilibrium - then a Disturbance - followed by a New Equilibrium. Todorov's theory explains that the opening sequence should establish the location, and main character. Basically the opening sequence should establish the equilibrium. Most Hollywood films adopt a linear narrative because it keeps the storyline simple. A film could begin with the disturbance in the title sequence by using flashback, dream sequences and flash forwards. In Ocean's Eleven, equilibrium is the first stage and is important because it establishes the genre, and setting. The main character or protagonist is established by the dimly lighted room which connotes the criminal side to him. Also there is a window, which creates shadow on which connotes his dark side. Some of the other visual signifers are the prison guard which makes it very obvious this is a prison. . There are also aural signifers such as the clanging on the metal bar, reveals it is a prison. The heist genre is connoted by the fast upbeat music; it shows this movie is fast paced .The lighting is very dark inside but it is sunny outside suggesting freedom and a new start. The heist genre is revealed by the flashing light of the city which connotes wealth and sophistications. This connotes the action is going to happen here so the audience ready and guess the plot. The opening sequence of Ocean's Eleven conforms to the convectional linear structure of many films. Ocean's Eleven has a linear structure and this make the film conventional. ...read more.

On the other hand, it is also possible to identify several differences between the films. The Bone Collector has more complex storyline whereas Ocean's Eleven has simpler one. Both films have high production values and this is shown by the studios which produced Ocean's Eleven and The Bone Collector. The Bone Collector was produced by Columbia and Universal Picture and Ocean's Eleven was produced by Village Roadshow Pictures. We can also tell that these films have a high production value because the cast contain A-list actors like Brad Pitt, George Clooney and Denzel Washington. Both films have mainstream audience, though The Bone Collector would attract a smaller number because there are only two A-list actors and it has more complex storyline. Some of the difference can be explained because Ocean's Eleven has a more convectional approach to the genre, because the film follows a linear storyline. Whereas The Bone Collector has a more innovative approach to genre, as the director uses flashbacks to explain the story. Ocean's Eleven is the more successful in introducing genre and narrative because it had a linear structure, therefore it is less complicated. Ocean's eleven had successfully created an engaging and coherent narrative because it uses conventional yet sympathetic character e.g. Danny Ocean in Ocean's Eleven. Also Ocean's Eleven was more successful because of the clear establishment of equilibrium, so the audience knows what is happening in the storyline. The most effective technique was the crime genre signifier's e.g. the gadgets, mobile phone and the prison cell, whereas The Bone Collector uses the signifers to signify the thriller genre where as Ocean's Eleven more signifies the crime genre. Rekesh Vekariya Page 1 of 4 ...read more.