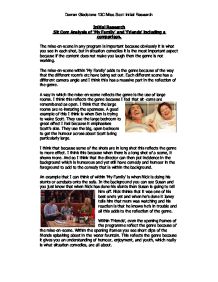 Sit Com Analysis of 'My Family' and 'Friends' including a comparison.

Initial Research Sit Com Analysis of 'My Family' and 'Friends' including a comparison. The mise-en-scene in any program is important because obviously it is what you see in each shot, but in situation comedies it is the most important aspect because if the content does not make you laugh then the genre is not working. The mise-en-scene within 'My Family' adds to the genre because of the way that the different room's etc have being set out. Each different scene has a different camera angle and I think this has a massive part in the reflection of the genre. A way in which the mise-en-scene reflects the genre is the use of large rooms. I think this reflects the genre because I feel that sit-coms are remembered as open. I think that the large rooms are re-instating the openness. A good example of this I think is when Ben is trying to wake Scott. They use the large bedroom to great effect I feel because it emphasises Scott's size. They use the big, open bedroom to get the humour across about Scott being particularly large. I think that because some of the shots are in long shot this reflects the genre to more effect. I think this because when there is a long shot of a scene, it shows more. And so I think that the director can then put incidence in the background which is humorous and yet still have comedy and humour in the foreground to add to the comedy that is within the background. ...read more.

The first camera angle that I can think of that presents ideology in 'Friends' is the one that shows the friends collected together in the 'Central Perk'. Firstly the camera goes from showing the logo of 'Central Perk', onto the sofa where the group is sat. The break from the two frames is interesting though, because it is a clean break from the logo to the friends and has absolutely no dissolving or blurring within the change. I think the shot of the friends sat together on the sofa presents ideology because it shows a good, strong group of friends sat together in conversation and a good friendship is vital to society. Also, when you see the friends sat together you can see that Ross is sat reading and the rest are talking together and I think that this reflects their personality. Another camera technique that is used during this scene is panning. If you remember this was also used in 'My Family'. It is used in 'Friends' when Melissa comes into the scene. The camera pans onto Melissa as she appears from behind an extra and stays with her till she talks to the bar tender. I think the camera did this to get across the importance of Melissa and to tell us that she is going to be an important part of this scene. Audience Expectations 'My Family' reinforces and manipulates the audience expectations very well on several occasions One example of how 'My Family' ...read more.

As Melissa is leaving she is still denying that she kissed Rachael. So, then Rachael tries to get her to remember what they did and so did it again. I think that this was expected by a lot of us but it was what I definitely expected. Next we have the way in which 'Friends' manipulates the audience expectations. The best example of this is when Febe kisses Rachael immediately after Rachael had just kissed Melissa. We certainly don't expect what we see here. As Rachael turns around we just expect to see Phoebe amazed at what she just saw but the total opposite happens. When Rachael had turned round we then see Phobe kissing Rachael full on and Rachael is stunned and doesn't know where to put herself. Then Rachael asks Phoebe "What the h**l was that?" and Phoebe's reply is one that I think we should expect from her as she replies with "I just wanted to see what all the fuss was about". This is, I think, a typical thing that we expect Phoebe to say after an incident like this. I think overall that 'My Family' reinforces and manipulates audience expectations than 'Friends' because I think that within 'Friends' what we see is what we expect to see and I think this happens because we know more about the characters and the way in which they react in different situations. Darren Gladstone 13C Miss Scott Initial Research ...read more.