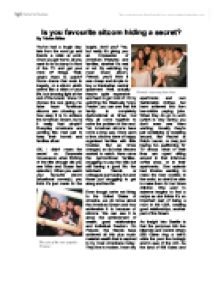 Is you favourite sitcom hiding a secret? By Tristan Miles You've had a tough day; late from the word go and there's a crisis at work. Once you get home, all you want to do is slump in front of the TV and get your mind off things. Well, what's there to watch? Some drama that ends in tragedy, or a sitcom which seems like a video of your life, but showing light at the end of the tunnel. I know I'd choose the one giving me false hope. American sitcoms are showing us how easy it is to achieve the American Dream, but is it really that simple? Everyday Americans are working like mad just to keep their homes and families afloat. OK, I didn't mean the secret on Desperate Housewives when thinking of the title (though did you see Mike and Susan last episode!). When you watch your favourite sitcom (situational comedy), you think it's just made for the laughs, don't you? ...read more.

On Friends, the friends have achieved all this plus much material wealth that is aspired to by most Americans today. They live in modern, inner city apartments and own fashionable clothes, but have achieved this from low-middle paying jobs. When they do go to work (which is very rarely) you don't even see them working. Usually they're just socialising or sneaking around, like Rachel at Ralph Lauren, or Joey just having fun auditioning for TV shows. Most of their lives are spent sitting around in that infamous coffee shop, or in their apartments. One episode had Monica wanting to make the best cookies in the world, so she'd be able to make them for her future children. She went to extreme lengths to find a recipe as she thinks it's an important part of being a mum in the USA, creating good relationships, another part of the Dream. An insight into Seattle is that the pompous rich live blissfully and control others (Bill Gates ring a bell?) while the poor live boringly and in awe of the rich. ...read more.

Even after the increased threat of terrorism, these sitcoms fail to recognise its significance, though now the World Trade Centre can't be seen in Friends clips post 2001. Friends and Frasier rarely show any people other than Caucasians, but today's world is increasingly becoming more multi-cultural. Some ethnic differences are accepted without problem, like Joey's Italian background on Friends. However, there is rarely an African-America character, even though there are a high proportion of these people in the USA. The family on Frasier is rich and they get severely annoyed with poorer people, who seem to have different values. Friends and Frasier both make fun of older people (usually classified as parents or people with white hair). They are usually shown as stupid and left out of the main characters' lives. When they do appear to be smart or wise, the main characters get shocked. So is your favourite sitcom hiding a secret? Mine is. It's telling me that it's easy to achieve the American Dream, when it isn't really. Maybe we should all just keep watching Desperate Housewives instead of sitcoms, hoping Susan and Mike never marry, as they're clearly not meant for each other. ...read more.