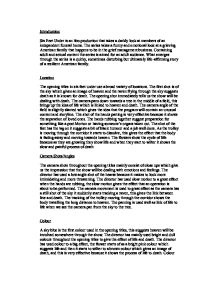 Six Feet Under is an hbo production that takes a darkly look at members of an independent funeral home.

Introduction Six Feet Under is an hbo production that takes a darkly look at members of an independent funeral home. The series takes a funny and emotional look at a grieving American family that happens to be in the grief management business. Containing adult and s****l content the series is aimed for an adult audience. What emerges through the series is a quirky, sometimes disturbing but ultimately life-affirming story of a resilient American family. Location The opening titles in six feet under use a broad variety of locations. The first shot is of the sky which gives an image of heaven and the raven flying through the sky suggests death as it is known for death. The opening shot immediately tells us the show will be dealing with death. The camera pans down towards a tree in the middle of a field, this brings up the idea of life which is linked to heaven and death. The camera angle of the field is slightly slanted which gives the idea that the program will contain an unusual content and storyline. ...read more.

The camera movement is used to great effect as the camera has a still shot of the sky it suddenly starts tracking a raven, this gives the link between live and death. The tracking of the trolley moving through the corridor shows the body travelling the long distance to heaven. The panning is used well as link of life to life when we see the camera pan from the sky to the tree. Colour A sky blue is the first colour used in the opening titles, this suggests heaven will be involved somewhere through the show. The director has mainly used bright and dull colours throughout the opening titles to give the effect of life and death. The director has used colour to a big effect, the flower starts of as a bright pink colour which suggests life and then it starts to wilter to a brown colour which gives an image of death, and this is very effective because it shows the process of life to death. ...read more.

The speed picks to a more dignified pace and the music sounds as if there is a journey, this is linked to the journey towards heaven. The pace is fast as the flower is growing and as it starts wiltering we hear a high pitched note and the speed slows down. Towards the end of the titles the sound starts to fade away to let the viewer know the show is about to start. Conclusion The opening titles six feet under were successful because they give they were very effective and gave an incisive look into the series. The opening titles immediately suggest that the series will contain life and death as the shot of the sky and raven is shown. The director has used colour to major effect as it shows the effect of each location, the flower goes through different stages and this is shown by changing the colours from bright to dull. The sound was very important in the opening titles because each time there was a different location the sound would change to a certain speed or rhythm. Overall the opening titles were a success and all areas of making the titles were successful. ...read more.