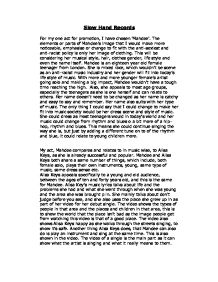 Slow Hand Records For my one act for promotion, I have chosen 'Mahdee'. The elements or parts of Mahdee's image that I would make more noticeable, emphasise or change to fit with the anti-sexiest and anti-racist policy is only her image of clothing. This will be considering her musical style, hair, clothes gender, life style and even the name itself. Mahdee is an eighteen year old female teenager from London. She is mixed race, which wouldn't be scene as an anti-racist music industry and her gender will fit into today's life style of music. With more and more younger female's artist going solo and making a big impact, Mahdee wouldn't have a tough time reaching the high. Also, she appeals to most age groups, especially the teenagers as she is one herself and can relate to others. Her name doesn't need to be changed as her name is catchy and easy to say and remember. Her name also suits with her type of music. The only thing I could say that I could change to make her fit into music society would be her dress scene and style of music. ...read more.

This is also shown in the video. The video of a single is the main part as it can show what the artist is singing and what it really means to them. CD COVERS The whole cover is kept simple and consistent by using the same colours and same theme. My CD front cover shows Mahdee in a shadow wither hat on, and beside her is her guitar also in showdown version. The front cover also shows the companies logo 'Slow Hand Records'. The cover also includes Mahdee's name in big capital letters with a red explosion stating which song is including on this CD. There is also a background wave of colour blue for design. The front cover is kept very simple and the name Mahdee is big so it stands out. The explosion (which has a red background) is titled too also stand out. Every pieces of object on the cover has a way of standing out. The logo is situated in the top left hand corner of the cover with Mahdee on the right between her name (on the left) ...read more.

The letters 'sma' is coloured in dark yellow and the letters 'sh' not coloured (white), saying keep this magazine quite as this is only for you. The magazine cover shows the top half (face, neck) of a person who is in a shadow type, as you cannot see his or hers face. There is also a big question mark on the face, making the audience want to open to see the face, which makes the magazine sell. The text below the picture is also used to give the suspense a little more thrill. The text says "new Brit Sensation!!" When the audience reads these three words and also sees the hidden face, it makes them want to see who Britain's new Sensation is. The word 'Sensation' is different to 'new' & 'Brit' as the reader's first see new and Brit. This word is different because the way an advert read it out would make the word Sensation sound separate. The items around the pictures are also included to show what else is in the magazines, and there is everything for every pop fan. The magazine also lets the audience know the price of the magazine with a bar code, situated at the top right hand corner. ...read more.