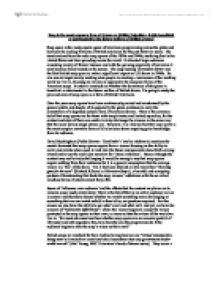 Soap is the most common form of drama on British Television: is this beneficial or detrimental to the future welfare of British drama

Soap is the most common form of drama on British Television: is this beneficial or detrimental to the future welfare of British drama? Soap opera is the most popular genre of television programming across the globe and has been the leading favourite of British television for the past forty-six years. The trend evolved from the radio soap operas of the 1930s and 1940s, surfacing first in the United States and later spreading across the world. It attracted large audiences consisting mainly of female listeners and with the growing popularity of television it soon became firmly rooted on the screen. The long running Coronation Street was the first British soap opera to make a significant impact on UK drama in 1960s. Its aim was to target mainly working class people in creating a microcosm of the working world we live in, focusing on realism as opposed to the escapism forms of the American soaps. In order to conclude on whether the dominance of this genre is beneficial or detrimental to the future welfare of British drama, I'm going to study the pros and cons of soap opera as a form of British Television. Over the years soap operas have been continuously praised and condemned by the general public and despite of its popularity the genre continues to carry the connotation of a degraded cultural form of television drama. ...read more.

British soaps are watched for their realism having become our "virtual communities, doing more to break down social and class boundaries than any government leader could ever do" (Mal Young, BBC Television's head of drama series). They cover a diverse range of issues, in particular domestic, from storylines of health, relationships, business and family, to the ever so popular murder and death. Based, for the most part, on problems experienced within personal relationships and family life the content of the soap is fundamentally humanised, and thus we find the lifestyles led on screen are not so different from our own. They attempt to represent the realities of a working class life and confront many of the problems faced in our society, exploring all the different possibilities and affects of such struggles but never claiming to offer a single solution. The realism of these soaps is emphasised more so by the reasonably slow pace at which the narrative is allowed to progress appearing more or less to be 'unravelling' in real time. Viewers can often identify with the stereotype characters of the drama series that become almost existent to them. However, there are much bigger dramas in our world than domestic murder and by resorting to melodrama it's as if we are choosing a more safe and cosy view of society. ...read more.

The fact that soap operas are continuous and avoid narrative closure would make it more difficult, I believe, to create a strong drama series about a deeply serious and ongoing issue. They are good at showing the domestic issues that many encounter and should rest at that. What is destructive to the welfare of British drama is that television companies are now avoiding more challenging storylines and forms of drama with the fear that they will lose money. Soap operas can easily recover but a single drama either works or 'flops'. I feel that a balance is needed in that we have our intake of soap operas but there are so many crowding our television airtime that any more would be a waste and hinder other forms of more serious drama. I find myself also questioning the continuity of its popularity, for if there are too many soap operas then we see the same issues occurring again and again. The interest may soon die as we seek for more challenging material and thus, the necessity for a balance is vital, in having airtime for escaping into another world, realistic or not, without having to think to much, and having time for the more serious programmes where we are left questioning. ...read more.