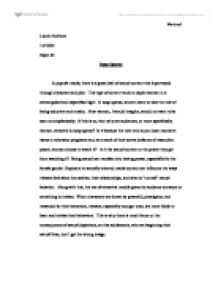 Lauren Martone 11/13/03 Paper #3 Soap Operas In popular media, there is a great deal of s****l content that is portrayed through characters and plot. This type of content tends to depict women in a stereotypical and objectified light. In soap operas, women seem to take the role of being seductive and sneaky. Most women, I would imagine, would not want to be seen so simplistically. If this is so, then why are audiences, or more specifically women, attracted to soap operas? Is it because the men tend to put down women's tastes in television programs and, as a result of their active defiance of masculine power, women choose to watch it? Is it the s****l content or the power they get from watching it? Being s****l can translate into having power, especially for the female gender. Exposure to s******y oriented media content can influence the ways viewers feel about themselves, their relationships, and what is "normal" s****l behavior. Along with this, the use of attractive models gives the audience someone or something to imitate. When characters are shown as powerful, prestigious, and rewarded for their behaviors, viewers, especially younger ones, are more likely to learn and imitate their behaviors. This is why there is much focus on the consequences of s****l depictions, so that adolescents, who are beginning their s****l lives, don't get the wrong image. Television soap operas are based on personal relationships within the every day life of its characters. They also have a high level of s****l content, and in recent years have incorporated storylines on topics of homosexuality, transsexuality, and oral s*x as well as AIDS, abstinence, and contraception. ...read more.

This is obviously not true, but to younger audiences who do not understand their sexuality yet, they might be getting the wrong message. Recently there is less talk about date r**e, and less instances of it portrayed in daytime television. Although this is true, it is still an issue that teenagers, especially, must be aware of. For this reason alone, I think that there should be more discussion about how to avoid date r**e, and how to protect oneself from even getting into a situation where one could be raped. In the soap operas All My Children, and Sunset Beach, there are s****l issues that revolve around teenage relationships. There were discussions about whether or not to wait before having s****l intercourse. In All My Children, the storyline was about a teen-aged birth mother suing the adoptive parents for custody of her child. This storyline allowed for several discussions about the consequences of unplanned and unprotected s****l activity, and about the importance of waiting until one is ready before engaging in s****l intercourse. Although soaps sometime discuss the consequences of s****l acts, there are too many episodes that let s*x just happen without any real discussion of its consequences. For instance on the soap Sunset Beach, there is a character, Annie, who is about twenty five years old, who sleeps with everyone on the show who has something that she wants. She is very rich and extremely manipulative. Through her conversations with friends, the audience learns that, deep down, all she wants is to find true love. ...read more.

This allows the audience to discuss these issues without talking about themselves, which can be uncomfortable. An individual's morals and values about s*x should stem from the home. It is the parents' job to try and teach their children what s*x and being a s****l person is all about. If these values are implemented, the young viewer should be able to decipher between what is right, what is wrong, and what is exaggerated. There are a variety of reasons for women to be attracted to soap operas, and sexuality is definitely one of them. Being a woman is a very powerful thing, and many people do not understand that. Some women and teenagers may feel that power when watching a s****l encounter, knowing that they have the power to do the same thing (less dramatically of course). s*x and being s****l are intriguing concepts that are very mysterious to some. By watching soap operas, we see the dramatic portrayal of how relationships should and should not be. There is the right and wrong way to go about becoming s******y active. Soap operas are an excellent way to see and learn about all of the right and wrong ways of dealing with issues, especially ones that deal with s****l relationships. People are always looking for a way to improve their relationships or spice them up, and soap operas are an excellent way to either learn something new, or fanaticize about the perfect relationship. The fact that soap operas are so exaggerated, I feel, is the major draw to them because they make reality and everyday life seem more normal. ...read more.