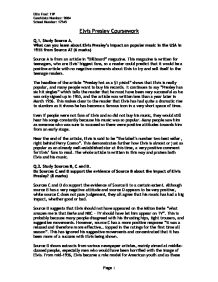 Elvis Presley Coursework Q.1. Study Source A. What can you learn about Elvis Presley's impact on popular music in the USA in 1955 from Source A? (6 marks) Source A is from an article in "Billboard" magazine. This magazine is written for teenagers, who are Elvis' biggest fans, so a reader could predict that it would be a positive article with no negative comments about Elvis to try and sell itself to the teenage readers. The headline of the article "Presley hot as a $1 pistol" shows that Elvis is really popular, and many people want to buy his records. It continues to say "Presley has six hit singles" which tells the reader that he must have been very successful as he was only signed up in 1955, and the article was written less than a year later in March 1956. This makes clear to the reader that Elvis has had quite a dramatic rise to stardom as it shows he has become a famous icon in a very short space of time. Even if people were not fans of Elvis and so did not buy his music, they would still hear his songs constantly because his music was so popular. Many people saw him as someone who was sure to succeed so there were positive attitudes towards him from an early stage. Near the end of the article, Elvis is said to be "the label's number two best seller, right behind Perry Cosmo". ...read more.

Use the sources and your own knowledge to explain why this was happening (12 marks) People's opinions towards Elvis Presley started to change by 1958, from a negative attitude to a more positive one. One reason for this is that Elvis Presley served in the U.S. army in 1958. It was compulsory for a man at this time to serve in the army for two years during his lifetime. However, it was also well known that many of the people who had money or power would usually "try to use his influence to buy his way out". Elvis Presley did not do this though, and was therefore seen as trying to promote the American way of life. Source G, a magazine article about his service in the army, says "such a rich and famous man serve alongside other draftees without using his influence to buy his way out". Americans believe in the American dream, which is the idea that if someone works hard enough, they can achieve what they are aiming for. The extract from the magazine article in source G refers to this American dream, "where else could a nobody like Presley becomes a somebody so quickly". This gives the impression that Elvis has achieved the American dream, because although I know he was born into quite a poor family, he had become a well-known icon through his hard work and attitude, this gained him a lot of respect. Opinions also became more positive towards Elvis, because he had started to release music, which was seen as a lot less controversial; such as soundtracks for his films also he had given up his performances as these were seen as very rebellious. ...read more.

In total Elvis starred in 33 films, although many agree that his early films were the best. It wasn't until the mid 1960's however, that Elvis' acting career made him rich and people finally thought that he had fully achieved the American dream. At this time, Elvis was demanding a million dollars for each film that he made, making him the richest person in Hollywood at that time. In 1967, Presley's films 'flopped' both among critics and at the box office. For this reason, he began to focus on his music once again. I believe his television performances helped him to do this because it was due to the "singer special comeback" which was televised in 1968 that launched the final stage of his career. Many believe his music career was more successful than his acting and overall he sold more than five hundred million records. However, Elvis began to have less impact on society at this stage. For these reasons I think that the impact of Elvis Presley on U.S. society during the 1950's was more the result of his music, however his television appearances and film career along with society's change in opinion did add to this impact greatly and because of the great impact he had on society, he is still remembered for his unique style of rock and roll music today. Many people remember this unique style because of the way he pushed the boundaries of acceptability in his earlier years of fame. Ellie Frost 11P Candidate Number: 9084 School Number: 17545 Page 1 ...read more.