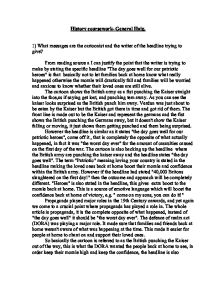 Source based questions on General Haig.

History coursework- General Haig. 1) What messages are the cartoonist and the writer of the headline trying to give? From reading source a I can justify the point that the writer is trying to make by stating the specific headline "The day goes well for our patriotic heroes" is that basically not to let families back at home know what really happened otherwise the morale will drastically fall and families will be worried and anxious to know whether their loved ones are still alive. The cartoon shows the British army as a fist punching the Kaiser straight into the face,as if saying get lost, and punching tem away. ...read more.

the opposite of what actually happened, in fact it was "the worst day ever" for the amount of casaulties caused on the first day of the war. The cartoon is also backing up the headline where the British army are punching the kaiser away and the headline states "the day goes well". The term "Patriotic" meaning loving your country is stated in the headline making the loved ones back at home boost their morale and confidence within the British army. However if the headline had stated "40,000 Britons slaughtered on the first day!" then the outcome and approach will be completely different. "Heroes" is also stated in the headline, this gives extra boost to the morale back at home. ...read more.

The defence of realm act (DORA) was playing a major role. It made sure that families and friends back at home weren't aware of what was happening at the time. This made it easier for people at home to chant on and support their loved ones. So basically the cartoon is referred to as the British punching the Kaiser out of the way, this is what the DORA wanted the people back at home to see, in order keep their morale high and keep the confidence, the headline is also positive and boosts morale back at home, but however none of this was true, it was all propaganda because on July 2nd 1916 it "was the worst day ever" of over 400,000 casualties. Now the DORA kept that to themselves and told every one at home completely the opposite. ...read more.