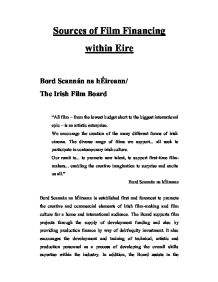 Sources of Film Financing within Eire.

Sources of Film Financing within Eire Bord Scann�n na h�ireann/ The Irish Film Board "All film - from the lowest budget short to the biggest international epic - is an artistic enterprise. We encourage the creation of the many different forms of irish cinema. The diverse range of films we support... all seek to participate in contemporary irish culture. Our remit is... to promote new talent, to support first-time film-makers... enabling the creative imagination to surprise and excite us all." Bord Scann�n na h�ireann Bord Scann�n na h�ireann is established first and foremost to promote the creative and commercial elements of Irish film-making and film culture for a home and international audience. The Board supports film projects through the supply of development funding and also by providing production finance by way of debt/equity investment. It also encourages the development and training of technical, artistic and production personnel as a process of developing the overall skills expertise within the industry. ...read more.

The producer is obliged to repay the advance on the first day of principal photography. These should be seen as feasibility/development loans; the Board will make every attempt to track these funds and provides information and assistance for independent producers looking for potential production partners. It should be noted that some projects that have received development loans from the Irish Film Board (IFB) will fail to make it into production and so will eventually be written off. However, all projects that do come to fruition are closely monitored by the Board and the collection of the money owed is keenly pursued. Production Loans The Board's involvement takes the guise of investment in the production and in its sales for television, video, cinema and subsidiary markets (cable, satellite, home box office, etc.) both in Ireland and worldwide. The investment is not subject of interest as rigorous measures for recoupment and profit participation are applied. ...read more.

Looking forward into MEDIA+/MEDIA Plus, there is a commitment on the MEDIA Desk's part to continue this work and to match greater sophistication and scale of the Irish cinematic and audio-visual industry. European Funding and Support MEDIA Plus MEDIA Plus follows on from the work done by MEDIA I and MEDIA II. It is a European Union funding scheme managed by the European Commission in Brussels. MEDIA Plus runs from January 2000 until December 2005 and includes funding provision for film festivals but the kind of support and size of budgets had not been finalised at the time of research. European Co-ordination of Film Festivals (ECFF) The European Co-ordination of Film Festivals is a membership organisation with the objective of developing and strengthening the sector through promotion and collaboration. It is not necessarily a funding body, although it does provide support its members through ECFF programming projects, conferences and staff training. Membership to the ECFF is subject to a number of conditions and it is for this reason that it is usual for only the larger U.K. film festivals tend to qualify. ...read more.