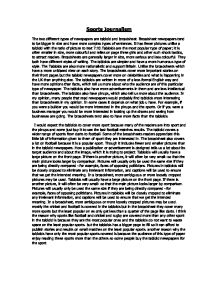 Sports Journalism The two different types of newspapers are tabloid and broadsheet. Broadsheet newspapers tend to be bigger in size and have more complex types of sentences. It has fewer pictures unlike a tabloid with the ratio of picture to text 7:10.Tabloids are the most popular type of paper; it is often smaller in size, more colourful and relies on page three girls and other such shock tactics, to attract readers. Broadsheets are generally larger in size, more serious and less colourful. They both have different styles of writing. The tabloids are simpler and have a more humorous type of style. The Tabloids are also more nationalistic and support Britain. Unlike the broadsheets which have a more unbiased view on each story. The broadsheets cover more important stories on their front pages but the tabloid newspapers cover more on celebrities and what is happening in the UK than anything else. The tabloids are written in more of a less formal English way and have more opinions than facts, which tell us more about who the audience are of this particular type of newspaper. The tabloids also have more advertisements in them and are less intellectual than broadsheets. The tabloids also have pinups, which also tell us more about the audience. In my opinion, many people that read newspapers would probably find tabloids more interesting than broadsheets in my opinion. ...read more.

The broadsheets also have pictures but fewer and less dramatic ones. The tabloids make the pictures seem more dramatic because it makes looking at the paper more interesting and makes you want to read into what happened. The taboids use linguistic devies such as illiteration, puns and rhetorical questions to make reading the article more exciting. The broadsheets do not use many of these and use a more formal and easily understandable type of writing. For example the headline for The Suns Supergoals is "TREBLE TO TROUBLE" but in The Guardian it is "Arsenal play the beautiful game but get beaten again". The words "game" and "again" rhyme in the headline but that is all the use of linguistic devices they use. It is easy to understand and gets the message across. In the Supergoals the headline is written in capital letters which makes it seem more dramatic and stands out more. You cannot understand the headline in the Supergoals quite so easily and requires you to think before you understand the pun. The caption in The Suns picture is also not easily understood and requires thinking but makes the caption more interesting "GUNNED DOWN...Seamen, Cygan and Campbell in distress." In this caption they use the word "Gunned" because Gunners is the nickname for Arsenal. The caption for the tabloids picture is more understandable and doesn't require any thinking "Liverpool's Salif Diao,right, fends off Steffen Freund." ...read more.

This shows how women are used more as s*x symbols in newspapers rather than sportswomen. There is also an article and a picture on a tennis player but this time a man. It is of Mark Philippoussis and says things like"Hunk Rating:1" Even though there is a man used as a s*x symbol it is one of a few. It is not often men are used as sexy symobls in newspapers. The main difference in coverage of sports in the both the papers is the way they write. Broadsheet newspapers are more informal and intellectually written. Tabloids are more entertaining and interesting. I personally think things are right the way they are because they suit the type of audience they aim for. The tabloids are more successful because they are more interesting and have a varied audience. The broadsheets have a more of a audience that are intellectual and do not read newspapers for the excitement of the pin-ups. Broadsheets only include a picture of a naked women if it has something to do with the article unlike the tabloids. I would rather read the tabloids because it is interesting and more fun to read than a broadsheet. It doesn't let you lose interest and has small paragraphs so is easy to keep focused. If newspapers wanted to improve they should think about more types of audiences. The tabloids should have a more formal part in it and the broadsheets should include a bit of jokey language in their front pages to attract more readers. ...read more.