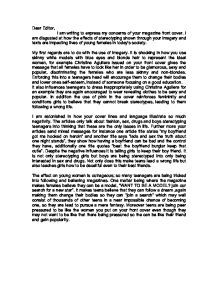 I am writing to express my concerns of your magazine front cover. I am disgusted at how the effects of stereotyping shown through your imagery and texts are impacting lives of young females in today’s society.

My first regards are to do with the use of imagery. It is shocking in how you use skinny white models with blue eyes and blonde hair to represent the ideal women, for example Christina Aguilera issued on your front cover gives the message that all females have to look like her in order to be glamorous, sexy and popular, discriminating the females who are less skinny and non-blondes. Enforcing this into a teenagers head will encourage them to change their bodies and lower ones self-esteem, instead of someone focusing on a good education.

It also influences teenagers to dress inappropriately using Christina Aguilera for an example they are again encouraged to wear revealing clothes to be sexy and popular. In addition the use of pink in the cover reinforces femininity and conditions girls to believe that they cannot break stereotypes, leading to them following a wrong life.

I am astonished in how your cover lines and language illustrate so much negativity. The articles only talk about fashion, sex, drugs and boys stereotyping teenagers into thinking that these are the only issues in life. Further more your articles send mixed messages for instance one article title states “my boyfriend got me hooked on heroin” and another title says “lads and sex the truth about one night stands”, they show how having a boyfriend can be bad and the control they have, additionally one title quotes “beat the boyfriend burglar keep that cutie”. Despite the negative influences it is telling girls to keep their boy friend. It is not only stereotyping girls but boys are being stereotyped into only being interested in sex and drugs. Not only does this make teens lead a wrong life but also teaches girls how to be deceitful even to their best friends.

The effect on young women is outrageous; so many teenagers are being tricked into following and believing magazines. One matter being where the magazine makes females believe they can be a model, “WANT TO BE A MODEL? join our search for a new star”. It makes teens believe that they can follow a dream ,again making them change their bodies so they can “join a search” which may well consist of thousands of other teens in a near impossible chance of becoming one, so they are lead to pursue a mere fantasy. Moreover teens are being peer pressured to be like the women you put on your front cover even though they may not want to be like that there being pressured so the can be like their friend and gain popularity.

I would suggest that your magazine should challenge dominant ideologies by showing people who intelligent, to hearten teenagers to have a good future i.e. good job and education. Parents wouldn’t want their children to follow a wrongful and uneducated life, would they? Also to do articles on issues that really matter like world poverty or global warming, make teens believe that they can break stereotypes.

In my opinion I think that your magazine cover is appalling. I find it offensive every time I look at it. How would you feel if your teenage son or daughter was hooked on heroin? Encouraged to try by reading a magazine they bought from a local shop. Or your grade A daughter giving up her education to become a model, to “join a search”. I strongly urge that we should teach the world of tomorrow not manipulate to lead a wrongful life. I hope you find it within yourself to take forward my concerns in the near future