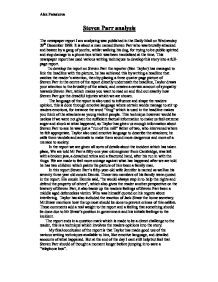 Steven Parr analysis - The newspaper report I am analysing was published in the Daily Mail on Wednesday 29th December 1999.

Steven Parr analysis The newspaper report I am analysing was published in the Daily Mail on Wednesday 29th December 1999. It is about a man named Steven Parr who was brutally attacked and beaten by a gang of youths, whilst walking his dog, for trying to be public spirited and stop damage to a phone box which was been vandalised at the time. This newspaper report has used various writing techniques to develop this story into a full-page report. To develop the report on Steven Parr the reporter (Ben Taylor) has managed to link the headline with the picture, he has achieved this by writing a headline that catches the reader's attention, then by placing a three quarter page picture of Steven Parr in the ...read more.

happened, so Taylor has given us enough information about Steven Parr to see he was just a "run of the mill" father of two, who intervened where he felt appropriate. Taylor also used emotive language to describe the attackers; he calls them vandals and animals to make them sound more dangerous and more of a menace to society. In the report we are given all sorts of details about the incident which has taken place, We are told Mr Parr a fifty-one year old engineer from Cambridge, was left with a broken jaw, a detached retina and a fractured hand, after his run in with the thugs. ...read more.

Mr Straw mentions how the up most should be done to prevent crimes of this calibre. These comments add a real weight to the report and a feeling that something should be done due to Mr Straw's position in government and his initials feelings to the incident. The report ends in a question mark which is made to be a direct challenge to the reader, this is a technique which involves the readers opinions into the story. My final conclusion of the report is that Taylor has made good use of the various writing techniques available to him, like emotive language, and detailed accounts of what happened. But at the end of the day I cant still help but feel that Steven Parr should of thought a moment longer before jumping in to save a "telephone box". Alex Paraskeva ...read more.