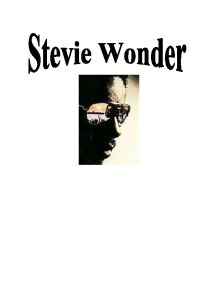 Stevie Wonder has been a major figure within the Black Music scene over the last forty years.

Stevie Wonder has been a major figure within the Black Music scene over the last forty years. Stevie Wonder was born Steveland Judkins on May13, 1950, however, he now prefers to be known as Steveland Morris after his mother's married name. He was blind at birth. The cause was the prematurity of the eye. Blood vessels in the back of the eye hadn't reached the front of the eye thus when he was born, prematurely, that growth temporarily stopped then wildly took off branching out in the Vitreous of the eye. After his family moved to Detroit in 1954, Steveland joined a church choir, the gospel leanings on his music balanced by R & B. In 1961, Ronnie White of the Miracles, who arranged an audition at Motown Records, discovered him. Berry Gordy immediately signed Steveland to the label. Wonder was placed in the care of writer / producer Clarence Paul, who supervised his early recordings. In 1963, the release of the live recording 'Fingertips' made his commercial success, and Motown quickly marketed him on a series of albums as 'the 12-year-old genius' to try to link him with the popularity of 'the late genius', Ray Charles. ...read more.

'Talking Book', in 1972, combined the technical advances of recent albums with big profitable success, producing hit singles from the driving 'Superstition', to the ballad standard 'You Are The Sunshine Of My Life'. Wonder married fellow Motown artist Syreeta on 14th September 1970; he premiered many of his new production techniques on 'Syreeta' (1972) and 'Stevie Wonder Presents Syreeta' (1974), for which he also wrote most of the material. 'Innervisions' (1973) consolidated the growth and success of 'Talking Book', bringing further hit singles with the socially aware 'Living For The City' and 'Higher Ground' The release of 'Fulfillingness First Finale' in 1974 epitomized a more thoughtful approach. The double album 'Songs In The Key Of Life', in 1976, was widely greeted as his most motivated and satisfying work to date. It demonstrated a mastery and diversity of musical forms and instruments, offering a cheerful tribute to Duke Ellington on 'Sir Duke', and heralding a pantheon of major black figures on 'Black Man'. ...read more.

His most public collaborations included work with Paul McCartney, which produced the hit, 'Ebony And Ivory', Gary Byrd, Michael Jackson and the Eurythmics, and on the benefit records by U.S.A. For Africa and Dionne Warwick & Friends. A story appeared from Reuters December 3, 1999, which read: 'American pop superstar Stevie Wonder told fellow worshippers at a church service in Detroit December 2 that he is to undergo an operation that would enable him to see again. Wonder hopes to have the operation, which involves the insertion of a microchip in his eye, at Baltimore's John Hopkins University's Wilmer Eye Institute.' His songs can be heard on Spike Lee's movie 'Bamboozled, entitled 'Misrepresented People' and 'Some Years Ago' and represented a return to Stevie's political comment. Stevie returned to recording in 2004 with the album 'A Time 2 Love'. The man has been the most influential Black Music artist over the last 4 decades. Whatever he turns his songwriting skills to, demands attention. Musical Contributions 1. My Cherie Amour (Talma 1969) R&B- piano 2. All I Do (Talma 1980) R&B- piano 3. Superstition (Talma 1972) R&B- synthesizer 4. Isn't She Lovely (Talma 1976) R&B-harmonica ...read more.