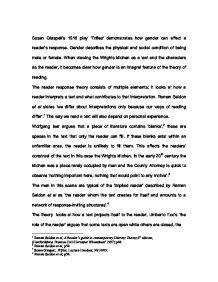 Susan Glaspell's 1916 play 'Trifles' demonstrates how gender can affect a reader's response. Gender describes the physical and social condition of being male or female. When viewing the Wrights kitchen as a text and the characters as the reader, it becomes clear how gender is an integral feature of the theory of reading. The reader response theory consists of multiple elements; it looks at how a reader interprets a text and what contributes to that interpretation. Raman Seldon et al states 'we differ about interpretations only because our ways of reading differ'.1 The way we read a text will also depend on personal experience. Wolfgang Iser argues that a piece of literature contains 'blanks',2 these are spaces in the text that only the reader can fill. If these blanks exist within an unfamiliar area, the reader is unlikely to fill them. This affects the readers' construal of the text in this case the Wrights kitchen. In the early 20th century the kitchen was a place rarely occupied by men and the County Attorney is quick to observe 'nothing important here, nothing that would point to any motive'.3 The men in this scene are typical of the 'implied reader' described by Raman Seldon et al as 'the reader whom the text creates for itself and amounts to a network of response-inviting structures'.4 The theory looks at how a text projects itself ...read more.

This is a significant point, the men in the play try to interpret Mrs. Wright's manner but are unable to come to any conclusions, when the women discover the untidy sewing they are able make assumptions about her mood and state of mind, they can identify with her as a woman and as a wife. Sara Mills states that 'the reader is subject to many discursive pressures which lead her to read in particular ways.'.12 Mrs. Peters avoids answering direct questions with her own opinion when asked by Mrs. Hale 'do you think she did it?'13 She replies with the opinions of her husband and his colleagues. She does sympathise, but what follows is an abrupt recall of her masculine implied reader response, e.g. 'I know what stillness is, but the law has got to punish crime, Mrs. Hale'.14 A reader always takes to a text a framework into which they fit the text, this explains why the men read the scene the way they do. The men interpret the text from a masculine point of view, they only know the facts, Mr. Wright is dead and Mrs. Wright was the only other person present. It would be natural for them, taking into consideration there historical viewpoint, implied reader response and gender role, to look for obvious signs of an argument or struggle. ...read more.