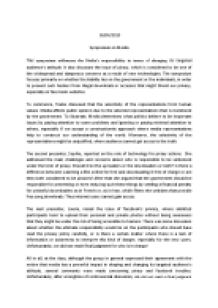 Symposium on Media and Piracy.

﻿26/04/2010 Symposium on Media This symposium addresses the Media?s responsibility in terms of changing its targeted audience?s attitude. It also discusses the issue of piracy, which is considered to be one of the widespread and dangerous concerns as a result of new technologies. The symposium focuses primarily on whether the liability lies on the government or the individuals, in order to prevent such hackers from illegal downloads or accesses that might threat our privacy, especially on face book websites. To commence, Feebe discussed that the selectivity of the representations form human values. ...read more.

The second presenter, Sophie, reported on the role of technology for piracy actions. She addressed the main challenges and concerns about who is responsible to be sentenced under the term of piracy. Should it be the up loaders or the downloaders or both? Is there a difference between watching a film online for free and downloading it free of charge or are they both considered to be piracies? After that she argued that the government should be responsible for preventing or even reducing such these things by settling a financial penalty for unlawful downloaders as in French or, as in Iran, which filters the websites that provide free song downloads. ...read more.

policy carefully, or is there a certain matter where there is a lack of information or awareness to interpret this kind of danger, especially for the new users. Unfortunately, we did not reach final judgment for who is in charge! All in all, at the class, although the group in general expressed their agreement with the notion that media has a powerful impact in shaping and changing its targeted audience?s attitude, several comments were made concerning piracy and facebook troubles. Unfortunately, after a longtime of controversial discussion, we did not reach a final judgment for who?s responsible to be charged for such illegal actions. ...read more.