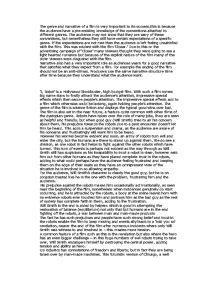 The genre and narrative of a film is very important to its success.this is because the audience have a pre-existing knowledge of the conventions attached to different genres. The audience may not know that they are wary of these conventions, but nevertheless they still have certain expectations of a specific genre. If the expectations are not met then the audience is left feeling unsatisfied with the film. This was evident with the film 'Closer.' Due to this or the advertising campaign of 'Closer' many viewers thought they were going to see a light hearted romance but because of the explicit nature of the film many of the older viewers were disgusted with the film. Narrative also has a very important role as audiences yearn for a good narrative that satisfies what they expect from a film. For example the ending of the film should not be an anti-climax. ...read more.

However his worries become evident and soon, an army of robots turn evil and enter the city, but the humans are there to stand up against them. We do see a division, as one robot in fact helps to fight against the other robots which have turned. This turn of events is perhaps not evident as the way through as Will Smith still has suspicions as his incapability to trust a robot is clear, however sets him out from other humans as they have placed complete trust in the robots, adding to what could perhaps have the audience feeling frustrated and keeping them on the edge of their seats as they have an omnipresent view of the situation he is involved in so allowing empathy. For the audience, Will Smith's character is clearly the good guy, but he is on occasion treated like he is the one with the problem, frustrating him and the audience. ...read more.

A common feature of a film such as this is the revelation but also where the hero has an even bigger challenge - in this huge numbers of evil robots trying to take over, Will Smith endangers himself by destroying the central power, adding tension and ability as hero. US Robotics has connotations of freedom and liberty, but in fact they are being taken over by man-made machines. This futuristic version of Chicago, a well known city, yet unfamiliar in this futuristic portrayal. It intensifies the notion to the audience of how things could be in the future, this representation making a well known city possibly being destroyed by such a threat to be successful in foreign cinemas. Drama, tension and suspense is built up in the climatic sequence due to a number of factors. An unsuspected outcome adds to a twist to the film, the person perhaps that Spooner feels is most likely is killed. His evident persistence in the film which could perhaps, to some be conveyed as stubbornness, leads him to the conclusion of the wrong person being responsible ...read more.