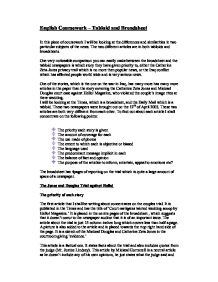 English Coursework - Tabloid and Broadsheet In this piece of coursework I will be looking at the differences and similarities in two particular subjects of the news. The two different articles are in both tabloids and broadsheets. One very noticeable comparison you can easily make between the broadsheet and the tabloid newspapers is which story they have given priority to, either the Catherine Zeta-Jones privacy trail which is no more then popular news, or the Iraq conflict which has affected people world wide and is very serious news. One of the stories, which is the one on the war in Iraq, has many more has many more articles in the paper than the story covering the Catherine Zeta Jones and Mickael Douglas court case against Hello! Magazine, who violated the couple's image rites at there wedding. I will be looking at the Times, which is a broadsheet, and the Daily Mail which is a tabloid. These two newspapers were brought out on the 12th of April 2003. These two articles are both very different from each other. To find out about each article I shall concentrate on the following points: The priority each story is given The amount of coverage for each The use made of photos The extent to which each is objective or biased The language used The predominant message implicit in each The balance of fact and opinion The purpose of the articles-to inform, entertain, appeal to emotions etc? ...read more.

It dominates the page and therefore are made unavoidable to the reader; the photo shows how the Iraqis are having to protect themselves in the city and taking what ever they like including money from a bank. To show that they are serious one man is wielding a knife to act as a warning to others to stay out of his way. This also tells the readers that the fact that Iraq has become a very unstable place to live because there is now no police force to protect the streets and there is no one to control the situation. The extent to which each is objective and biased As you read the article you get a feeling that the writer of the article is not impressed by the way that the forces have controlled and handled the war in Iraq. They seem to me to be surprised that only "Out of the 32 hospitals in Baghdad, only three are operating and not in a normal manner". They try to portray this quote in such a way so that they make the reader agree with them. So overall this article at least seems very anti-war and it shows how unimpressed the writers are about this whole affair. The language used The language in the article is very straightforward and simple to understand with only a few words that younger readers of the newspaper might not be familiar with. ...read more.

She doesn't leave out any details and tries to make the torture sequences as graphic as possible. This I think is done to make you think about what kind of lives the Iraqis had while Saddam was in power. As a whole the article isn't biased, it's more an objective piece of writing. Conclusion After comparing the two stories, Catherine Zeta Jones. Vs. Hello! trial, and the conflict in Iraq, the two different newspapers the broadsheet The Daily Mail and the tabloid The Times, I have concluded that the papers write about anything that they know will make the most money, no matter what it consists of., so what you see is generally what you get because if you see a cheaper paper, or a small newspaper sitting on the side it is more likely to be a 'low quality' newspaper. Their front page will usually be covered in advertisements along with popular news and gossip. So over all you know that as long as the people who are able to get more money by moulding the paper into what they want it to be like and how they know that people will read 'rubbish' as well as important news just to get their money. The Times on the other hand is a different story because they have given priority to the serious news. They have longer and more complex articles that are well written and accurate. The paper isn't cluttered with advertisements in the middle of a serious article and it is generally a more interesting read. ...read more.