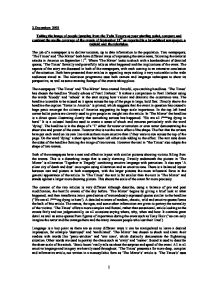 Taking the image of people jumping from the Twin Towers as your starting point, compare and contrast the media coverage of the events of September 11th as reported in a broadsheet newspaper, a tabloid and the television.

2.December. 2001 Taking the image of people jumping from the Twin Towers as your starting point, compare and contrast the media coverage of the events of September 11th as reported in a broadsheet newspaper, a tabloid and the television. The job of a newspaper is to deliver accurate, up to date information to the population. Two newspapers, 'The Times' and 'The Mirror' both have different ways of expressing the same news, following the terrorist attacks in America on September 11th. Where 'The Mirror' looks to shock with a bombardment of detailed quotes, 'The Times' formally and powerfully tells us what happened and the implications of the event. The aspects of the story are discussed in both of the newspapers, with each coming to an extensive conclusion of the situation. Both have presented their articles in appealing ways making it very noticeable to the wide audiences aimed at. The television programme uses both camera and language techniques to show its perspective, as well as some amazing footage of the events taking place. The newspapers 'The Times' and 'The Mirror' have created forceful, eye-catching headlines. ...read more.

The names, the ages, and some other information are given to portray the normality of the victims. 'The Times' offers a more complex and factual, rather than sensational, article looking at the events fairly and not judgementally, on all occasions saying where, why, when and how. It contains great detail as well as some quotes from figures of importance during the event such as Tony Blair ('we can only imagine the terror and the carnage there and the many innocent people who lost their lives'). Language is a key point as there are so many different ways it can be manipulated to leave a desired impression, for example 'destroyed' and 'annihilated'. 'The Mirror' has chosen to shock and alarm their readers with words like 'panic-stricken' and 'war zone', which distinctly demonstrate the frightening situation. Other words are used to portray the chaos such as 'crazy' and 'insane'. Sound is used to describe the shear scale of the attack. 'Sonic boom' really tells us about the surprise and speed of the event. All in all emotive language and imagery are heavily used throughout. ...read more.

As most of the footage is live there has been little opportunity for any editing. However, this adds to the effect of panic. Each piece of media work analysed in this essay has the purpose of shocking you whilst at the same time conveying to you all the available information. 'The Mirror's' article successfully achieves the shock and horror of the events, but is less interested in reporting the facts. For example it tends to be a series of quotes. 'The Times' tends to focus more on factual detail than on achieving shock and suspense and therefore is packed full of interesting information, although it becomes monotonous towards the end. The television news programme, sketchy as it is, is direct and to the point. As television is the main source of news information it needed to be. It is informative as well as containing stunning pictures obtained from America's ABC Network. However it is visual and so can make a better impact. It can show outrageous concepts and perceptions more simply than a written article. For example, from the title of this essay, the programme can show us people falling where the articles can only describe and show us still photographs without sounds. By George Rose, L5G. 4 1 ...read more.