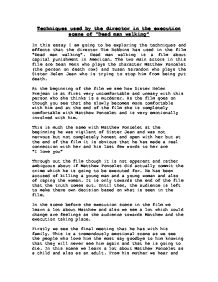 Techniques used by the director in the execution scene of &quot;Dead man walking&quot;.

Techniques used by the director in the execution scene of "Dead man walking" In this essay I am going to be exploring the techniques and effects that the director Tim Robbins has used in the film "Dead man walking". Dead man walking is a film about capital punishment in American. The two main actors in this film are Sean Penn who plays the character Matthew Poncelet (the person on death row) and Susan Sarandon who plays the Sister Helen Jean who is trying to stop him from being put death. At the beginning of the film we see how Sister Helen Prejean is at first very uncomfortable and uneasy with this person who she thinks is a murderer. As the film goes on though you see that she slowly becomes more comfortable with him and at the end of the film she is completely comfortable with Matthew Poncelet and is very emotionally involved with him. This is much the same with Matthew Poncelet at the beginning he was vigilant of Sister Jean and was not nervous but not completely honest and open with her but at the end of the film it is obvious that he has made a real connection with her and his last few words to her are "I love you" Through out the film though it is not apparent and rather ambiguous about if Matthew Poncelet did actually commit the crime which he is going to be executed for. He has been accused of killing a young man and a young woman and also of r****g the woman. It is only towards the end of the film that the truth comes out. Until then, the audience is left to make there own decision based on what is seen in the film. In the scene before the execution scene in the film we learn a lot about Matthew and also we see a lot which could change are feelings as the audience towards Matthew and the execution taking place. ...read more.

I think that the director is using this pose and playing on the idea of Jesus dieing to make the audience feel that this is an injustice, much in the same way that killing Jesus was an injustice. The director here has overall used this pose to make the audience be against him being killed. After he is displayed Matthew Poncelet is asked by one of the officers if he has any last words to say. Matthew Poncelet looks at Sister Jean and then speaks. "Yes I do" he then continues by saying that he is sorry to both families. He is sorry to both family for the pain and misery he has caused and also for taking away there children. He then hopes that his death can offer them so relief. He then finally finishes his last word speech saying "I just wanna let you know that I think killing is wrong, no matter who does it, albeit the government or me" This dialogue which the director has included in this scene is extremely important in the feelings the audience have. I think that the director has used this dialogue and also expression (as Matthew Poncelet is shaking nervously and scared when he says this) to make the audience feel one sorry for him as he is shaking fretfully and anxiously when he says and secondly I think the dialogue shows the audience that Matthew Poncelet is truly sorry has genuine remorse for what he has done. This again I think was used by the director to make audience feel sorry for him. After he has said this he is then taken from his vertical upright position and put into a flat position and then his execution commences. This part of the scene is now accompanied with some very strong emotional music. It is music though that doesn't make sense though. It is almost like tribal chanting and it almost sounds like the person who is singing it is in a lot of pain. ...read more.

He also showed us every bit of Matthew Poncelet death and was not afraid to show the side effects at every end. Overall I think that this scene was powerful because one it was absolutely truthful and secondly it was directed and shown in a number of clever ways which made you think more about what was happening and way it was happening. I did not think though that this scene was very balanced at all. I think that far worse, evil and over powering things were shown than good. In comparison I think that more over powering scenes were written aimed too make the audience feel that killing him was right than there were scenes that were aimed to make you feel that it was wrong. This I feel in turn over powers the audiences personal beliefs and makes them feel that his death it right and justified. From this then I think that I can safely say that I think that the director's personal views towards capital punishment are strong and certain. I think that the director Tim Robbins is definitely without a doubt for capital punishment although I do think he is against pain, misery and suffering to innocent and good people. I don't think that he is b****y thirsty in any way but I think that he thinks justice needs to be harsh and unsympathetic for the good of the world. Watching this film has definitely made me think more about capital punishment. When I was watching it, it made me think very carefully about what was being done and why and what its effects are. I wouldn't say that it has changed my views necessarily but it has definitely strengthened either side of my argument for capital punishment. I personally find it hard to say whether I am for or against capital punishment as either side of the argument has valid points. Overall in this film and most importantly in the execution scene I think that it explores every idea and concern about capital punishment and to do this it uses a wide range media techniques. ...read more.