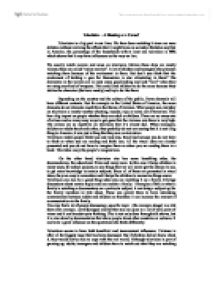 Television - A Blessing or a Curse?

Television - A Blessing or a Curse? Television is a big part in our lives. We have been watching it since we were children without realizing the effects that it might have on us today. Statistics say that in America, the percentage of the households with at least one television is 98% which shows that it may have influences on the way we live. We usually watch movies and news on television. Movies these days are mostly violent; these are called "action movies". A lot of children and teenagers take pleasure watching them because of the excitement in them. But don't you think that the excitement of holding a gun for themselves is also stimulating in them? The characters in the movies are in most cases good-looking and look "cool" when they are using any kind of weapons. ...read more.

Read less because you do not have to think as when you are reading and think less. All the visual ideas are already presented and you do not have to imagine them as when you are reading them in a book. This takes away the people's imaginations On the other hand, television also has some benefiting sides, the documentaries, the educational films and many more. In this case it helps children in many ways; for school projects, to see things that we will never get the chance to see, to get more knowledge in certain subjects. Since all of these are presented in visual ideas, they are easy to remember and it helps the children to memorize things easier. Television can also be a good thing when you are watching it as a family. ...read more.

It can have a great influence on the spectators who think differently. Television seems to have both beneficial and inconvenient influences. Violence is after all the biggest issue that has been discussed. But if children did not know about it, they would not be able to cope with the real world. Although television is part of growing up, adults, teenagers and children have to watch out what they are watching and monitoring how often they watch television. The older should be looking at what the younger are watching and censor unsuitable movies or channels depending on their age. To conclude, television has its own advantages and disadvantages and should be used wisely to collect information or from time to time, get away from the real world as long as it does not have too much effect on you. ...read more.