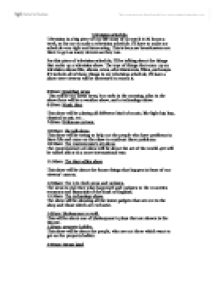 Television is a big piece of our life most of us watch it 20 hours a week, so for me to make a television schedule. I'll have to make my schedule very tight and interesting

Television schedule. Television is a big piece of our life most of us watch it 20 hours a week, so for me to make a television schedule. I'll have to make my schedule very tight and interesting. This is because broadcasters are there to get as many viewers as they can. For this piece of television schedule, I'll be talking about the things that make up a television show. The type of things that come up on television shows like, shows, news, advertisements, films, and soaps. If I include all of these things in my television schedule, I'll have a show were viewers will be interested to watch it. 6:00am: Breakfast news. This will be our latest news, but early in the morning. Also in the show there will be a weather show, and a technology show. 6:30am: Music time. This show will be playing all different kind of music, like light hip hop, classical music, etc... 7:00am: littleness cartoon. 10:00am: the talk show. This show will be trying to help out the people who have problems in there life and come on the show to confront there problems. 10:30am: The contemporary art show. The contemporary art show will be about the art of the world. ...read more.

Show about the brand new films that are coming out now in the cinemas. 2:00am: Mermaid Film about the natures of the world. 3:30am: News 24. The news. The name of my television channel will be "The Broadcasters" The type of audience that I'll be aiming this channel for is going to be all different type of people. From old people, to infant children. My television schedule is like all other television schedules. Like the BBC channel. My channel has tight scheduling. Their will advertisements between each show or programme. I'll have wide and broad viewers, because the channel is for all different kind of people. The morning programme in the schedule will mainly aim at young children; this is because children are not very busy in the morning. So they are the ones will be watching television in the morning. That is why I have the littleness cartoon early in the morning. Playing that programme for 3 hours is quiet essential, because children would want to watch cartoons till they are going to school. Or is time for time to really wake up and play about. This is called he breakfast time. The afternoon shows will be mainly for those adults. ...read more.

The Programmes that I have in my television channel is some different but also similar to other television schedules. The similarities are that the programmes are entertaining and also similar in the time that we presume for each programme. But I think that makes my schedule unique is that the programmes are a lot more entertaining from the other channels. The reason why I made my television schedule nice and tight is that I wanted my viewers to be entertained and to be always looking forward to be watching this channel. What I understand from the other channels is that they have programmes that are not really entertaining but for specific audience. The specificity is that they are unique to certain viewers but not for other. This is what I pick up from the other channels, which I implied in my television schedule. The different channels in the industry are very dependent on their advertisements. This is why they have very long time advertising. What I think I have not really have thought as audience is the older audience. But the reason I have done this is because most old people go to sleep early. So I included them in the tea time shows. This is because most old people will not have places to go, but also most of them do not work anymore. ...read more.