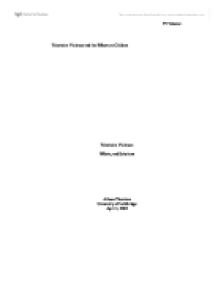 Television Violence and the Effects on Children

Television Violence and the Effects on Children Television Violence: Effects, and Solutions Allison Thornton University of Lethbridge April 1, 2002 "Every television show is educational. The lessons taught can vary infinitely." (Spicer). What lesson is violent television teaching our children? It is a sad reflection on today's media when children are hurt because other children are reenacting what they have seen on television. The cases in the news are many, the boy who thinking he was a "Power Ranger" and seriously injuring a friend. More recently the Taber, Alberta and Littleton, Colorado shootings, where the perpetrators at Colombine mimicked a scene from a movie, and with Taber mimicking the Colombine incident. This essay will cover three major effects of television violence on children and what can be done to protect children from television violence. The Issue "Media are means. We aim, through media, to indulge and serve our hungers by inviting images and sounds into our lives, making them come and go with ease in a never-ending quest for stimulus and sensation." (MacIntyre, 2002) Television can influence you everyday to buy certain products by advertisements, and influences your beliefs by the dramas, documentaries and newscasts. The concern is that Television can influence your actions after you walk away from the television. This makes the effect of violent portrayals in the media a concern as what does the viewer take away after they turn the television off. Studies have shown that subliminal messages fail to work to influence subconscious behavior (Vokey and Reed), but other messages can be conveyed through the television. "According to audience rating surveys (Nielsen, 1988), the typical American household has the television set on for more than seven hours each day and children age 2 to 11 spend an average of 28 hours per week." (Murray) Television in some homes has become an electronic babysitter, which allows parents to keep their children occupied while the adult has some free time. ...read more.

(Josephson) The most common character involved with violence are white middle aged males. (Potter) The most common victim is a female character or a child. Thus young girls begin to perceive themselves as potential victims and are more frightened by the world. People with Mean World Syndrome are more likely to over-guess the number of criminals and law enforcement officers employed in their area, as they see them on television. (Murray) In the wake of September 11th children have become more fearful of planes, and terrorist activities. Children also overestimated the damage done to New York city as they say the constant video loop of the buildings collapsing which in their minds added up to more then just the one structure collapsing. This Mean World Syndrome breeds an atmosphere of "get them before they can get me" and children become more aggressive and are more likely to expect aggressive acts. The social model of psychology states that children learn through imitating role models. Children begin to identify with their television characters as role models and may pretend to be them. In a study by Aletha Huston-Stein and her colleagues in 1972, children who had a 'diet' of Batman and Superman were more likely to be physically active, more likely to get into fights and scrapes, play roughly with toys, snatch toys from others and get into altercations. (Murray). Batman and Superman are both perceived as good guys and it is acceptable for them to use violence so the children may be of the belief that violence is acceptable to make you a hero. ). "In most televised programs the 'bad guy' gains control over important resources and amasses considerable social and material rewards through a series of aggressive maneuvers, whereas his punishment is generally delayed until just before the last commercial." (Martinez) This role modeling allows children to focus on the immediate rewards, like having the toy to play with, instead of the long term effects, like loosing a friendship because the child was greedy. ...read more.

Actors need to be educated of their 'role model' status and what their profession does to the rest of society. This trend has been started by actors like Eddie Murphy who have stated that they will turn down roles if they are too offensive to children. Social workers' roles in these responses varies, social workers can play a role in the education, advocating for better policies or more support groups, and helping to assist in research for continued methods on dealing with the effects. Social workers can play a role in education of the public, by working through schools, in families, and in adolescent children. At schools they can help facilitate awareness programs for teachers and students, such as Speak out Against Violence campaign that was started in 1996. By advocating for new policies Social workers help limit what is shown on television or in support programs help minimize the repercussions of violence. Researching the effects allow social workers to look at the person in the environment and see if there is another predisposition to be effected by violence. E. B. White wrote that: "I believe that television is going to be the test of the modern world, and in this new opportunity to see beyond the range of our vision, we shall discover either a new and unbearable disturbance of the general peace or a saving radiance in the sky. We shall stand or fall by television, of this I am sure." (Murray). The effects of television violence on youth's behavior is a complex issue. There are three clear effects of television violence on children, they become desensitized to violence, start into the "Mean World Syndrome" and they become predisposed to aggressive behavior. If, as it has been said that, it takes a whole village to raise a child, then it must take the whole media community to realize the influence of what a child sees on television. As a society we must continue to educate ourselves on the detrimental effects of television violence and take action to protect children from television violence. ...read more.