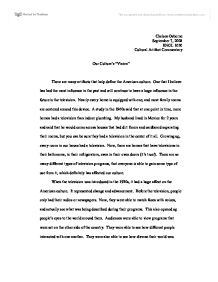 Television. When the television was introduced in the 1930s, it had a huge affect on the American culture. It represented change and advancement.

Chelsea Osborne September 7, 2008 ENGL 1050 Cultural Artifact Commentary Our Culture's "Vision" There are many artifacts that help define the American culture. One that I believe has had the most influence in the past and will continue to have a huge influence in the future is the television. Nearly every home is equipped with one, and most family rooms are centered around this device. A study in the 1960s said that at one point in time, more homes had a television than indoor plumbing. My husband lived in Mexico for 2 years and said that he would come across houses that had dirt floors and cardboard separating their rooms, but you can be sure they had a television in the center of it all. Growing up, every room in our house had a television. Now, there are homes that have televisions in their bathrooms, in their refrigerators, even in their oven doors (it's true!). There are so many different types of television programs, that everyone is able to gain some type of use from it, which definitely has affected our culture. ...read more.

The shows that people watch on television can portray certain ideals in our society. It can influence how we dress, the language we use, and the activities we engage in. Some people say that television can promote unhealthy habits and that can influence the way people act. I am a huge fan of the show Weeds, and I know that there have been times where I've thought, "I could be a drug dealer, it looks like a fun job." But there are also programs that reflect good values and high standards, and leave you with a feeling of wanting to do good in the world. Television has many positive benefits. It can be educational depending on the program's one is choosing to watch. It can help someone stay up to date on current events. It can also help to bring people together, whether it be to gather to watch a show or talk about the program after it has aired. Television definitely provides entertainment for individuals as well. There have been studies that link children's development with the programs that they are watching, which shows the positive effects television has at an early age in one's life. ...read more.

Someone stated that the television is making it harder and harder for pee wee sports to fill their rosters, because the kids are too busy playing their video baseball than to play actual baseball. The television is making it more and more possible for people to remain in their homes, not interacting with society. Television is definitely a common cultural artifact-not just in our society, but across the world. It is everywhere and whether it is used for education, entertainment, or background noise, you can't deny the fact that it influences the things that we do. It has helped to shape individuals and societies and will continue to do so in the future. It is interesting that our society talks about how negative the television is and that it is the reason more and more people are affected by obesity, but people seem to need the television. It's definitely a "can't live with it, can't live without it situation." The fact that people in today's culture find television a necessity proves the impact it has had over the past few decades, and I believe the more technology advances, the more the television with continue to impact our culture. ...read more.