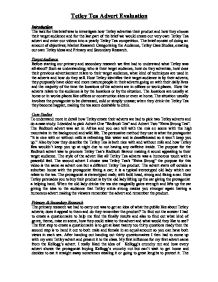 The task for this brief was to investigate how Tetley advertise their product and how they choose their target audience and for the last part of the brief we would create our very own Tetley Tea advert and enter our videos into a yearly Tetley Tea competition. The brief consist of doing an amount of objectives; Market Research Categorizing the Audience, Tetley Case Studies, creating our own Tetley ideas and Primary and Secondary Research.

Before starting our primary and secondary research we first had to understand what Tetley was all about? Such as understanding; who is their target audience, how do they advertise, how does their previous advertisement relate to their target audience, what kind of techniques are used in the adverts and how do they sell. How Tetley identifies their target audience is by their adverts, they purposely have older and more mature people in their adverts going on with their daily lives and the majority of the time the locations of the adverts are in offices or work places.  How the adverts relate to the audience is by the locations or by the situation. The locations are usually at home or in works places like offices or construction sites or even at home. The situation usually involves the protagonist to be distressed, cold or simply unease; when they drink the Tetley Tea they become happier, making the tea seem desirable to drink.

To understand more in detail how Tetley create their adverts we had to pick two Tetley adverts and do a case study. I decided to pick Advert One “Redbush Tea” and Advert Two “Extra Strong Tea”. The Redbush advert was set in Africa and you can tell with the mis en scene with the high mountains in the background and wild life. The persuasive method they use is what the protagonist “it is nice with or without milk is refreshing like water and is decaffeinated so it won’t keep you up.” Also by how they describe the Tetley Tea is both nice with and without milk and how Tetley Rea wouldn’t keep you up at night due to not having any caffeine inside. The purpose for the Redbush advert was to promote Tetley Tea’s Redbush flavour making it sound appealing to their target audience. The style of the advert like all Tetley Tea adverts was a humorous touch with a peaceful feel. The second advert I choice was Tetley Tea’s “Extra Strong” the purpose for this video is the same as advert one but a different Tetley Tea product. The advert starts off outside a suburban house with the protagonist fixing a car; it is a typical stereotyped old lady which can relate to the tea. The protagonist is stereotyped male; with bold head, strong and fixing a car. How Tetley persuades you to buy their product is by the old lady lifting up the car giving the protagonist a helping hand. When the old lady drinks the tea she magically gains strength and lifts up the car giving the idea to the audience that Tetley extra strong makes you stronger again having a humorous advert making the viewers remember the advert and remember the product.

The primary research we had to carry out was to get an idea of what the public like about Tetley adverts; does it appeal to them and do they remember the product? To find out the answer I had to create a questionnaire to help me find the finally results and also to find out what kind of genre, theme, mise en scene, how they could relate to the advert and what would they like to see? The first step to create a questionnaire is to get at least twenty too thirty questions ready then the second step is to hand it out to both male and female in an equal amount so you can have both views in each sex. After handing out handing out thirty questionnaires I then had to come up with my own Tetley advert and present it to the class. My first influence for my first advert came from the Kellogg’s advert. I really liked the idea of   Kellogg’s crunchy nut and how every advert shows the protagonist buying Kellogg’s crunchy nut but can’t wait to get home and decides to eat it straight away sometimes stealing it or going to great lengths to protect it. The purpose for each Kellogg advert is to show how amazing and tasty their corn flakes can be. Using humour to draw the viewer’s attention to the advert and remembering the product. My second idea I wanted to really relate to the audience and also use an extreme amount of humour in my advert so I came up with a house been burgled. The idea was to show a burglar breaking into a house taking all the jewellery and belongings until he finds the jackpot. The idea of the jackpot was to be a large sum of money and also a box of Tetley Tea. The house owner comes into the house and sees that the burglar is sitting in her kitchen drinking a cup of Tetley Tea. The theme of the advert would have a Mission Impossible feel to the advert along side the mission impossible classic theme song. Having the Mission Impossible theme would draw the audience attention till the end of the advert.

After figuring out my own adverts I then got all the questionnaires I handed out and what the results were. The questionnaire showed that a large sum of people preferred to see humour in the adverts and that they would prefer to see adverts that they can relate to. There was also a high amount of people that like to see adverts that relate to films or have it as a spoof, so my idea of having the burglar and the Mission Impossible theme in the background would be a positive option to do. One of the downfalls for the questionnaire for me was that no one ticked to see special effects in adverts, this could be a problem for me because I wanted a laser effect, as if the burglar would of triggered an alarm. To show the results in a more detail way to present to the class I had to create a graph showing the question and the option they had to tick in the box. It’s important that my presentation shows that the results that I got made me decide to change some parts to my idea help me deicide which of the two adverts I would decide to film.

I was placed in a group of three; myself, Josh and Katie. Before starting the pre production we first had to find out who wanted to do what in the pre production. I personally find doing the; script, storyboard and camera shot list very enjoyable. Katie wanted to do the Health and safety, treatment, and budget list and Josh would do the production schedule and treatment and since he is the most skilled editor in the group he would be doing the editing after the filming stage of the production.

It’s very important to keep on schedule thought out the entire production and most importantly the pre product, the start of the entire project itself. It’s this part of the project that if we fall behind on schedule that it would effect our time to film and then shortens our time to edit which would jeopardise I deadline for handing in our assignment on time. To make sure we keep on and on time it’s important that we as a group we do group meeting at least twice or three times a week. Each meeting will consist of how each member is doing with their part of the pre production, do they need more help, has any change been made for the project and most importantly who wont be able to make it to the filming. If we make sure that we are on schedule and keep to the pre production deadline we would be able to have one week of filming and two weeks of editing and a spare week just in case something goes wrong or of we need more time to film or edit. Last bit of the project before starting our evaluation would be to have time to have at least a day to show our finished advert and get views on what people think of it. To write up our evaluation would be have at least two weeks so it’s even more important to keep on schedule.

The location we found to film at was Katie’s house. It was important to show the audience that the location is at a suburban area making it more realistic for a burglar to burgle and also to relate to the audience, showing them a location they might know or even live in, drawing the attention of the viewer already before the actual advert had began.

We wanted to film the entire advert in one day so we would have plenty of time to edit and get audience feedback to change. I wanted to use a wide range of different shots so the audience watching won’t get bored. I used above the head shots in the corner of the room to make it look like CCTC camera. To make sure the audience would understand this more I would later tell the editor to use a CCTV effect on the shot; with the record icon flashing on the bottom right corner of the shot. I wanted to show more power to the bugler so I used a lot of high angle shots on the burglar. To show the selling product I used a point of view shot as if audience can see what the burglar can see.

After the filming stage was complete we then had to begin editing our advert. Before editing we first had to log all the footage into the computer and arrange all the shots we would use in the advert. We had four minuets of footage and it didn’t take long for us to log and capture all the footage we recorded.

One of the main constrains we had during the editing was when we finished the editing out advert was at least two to three minuets long. Our assignment said that the advert should be at least thirty to forty seconds long so we had to do a lot of deleting and also rearranging scenes and not only that we had to then decide which footage we should keep and which footage we should get rid of. To help us decide we decided to show the full length of the advert to a group of people and asked them which footage they think we should keep and which ones is unnecessary.

Overall I think that our advert for Tetley Tea was a success. The advert met all the client’s needs by being at its professional standard and also met all the assignment briefs expectations and also meeting the deadline. One of the main problems the advert will have for it to win is that the music we used was from the film Mission Impossible and the advert did show some Nintendo Wii games and due to copyright laws our group doesn’t have any right to show both these subjects.