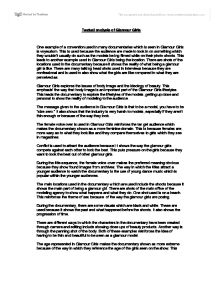 Textual analysis of Glamour Girls One example of a convention used in many documentaries which is seen in Glamour Girls is voyeurism. This is used because the audience are made to look in on something which they wouldnt usually do such as the model

Textual analysis of Glamour Girls One example of a convention used in many documentaries which is seen in Glamour Girls is voyeurism. This is used because the audience are made to look in on something which they wouldn't usually do such as the models being filmed while on their photo shoots. This leads to another example used in Glamour Girls being the location. There are shots of the locations used in the documentary because it shows the reality of what being a glamour girl is like. There are many talking head shots used in interviews because they are confessional and is used to also show what the girls are like compared to what they are perceived as. ...read more.

Conflict is used to attract the audience because it shows the way the glamour girls compete against each other to look the best. This puts pressure on the girls because they want to look the best out of other glamour girls. During the title sequence, the female voice-over makes the preferred meaning obvious because they show found images from archives. The way in which the titles attract a younger audience to watch the documentary is the use of young dance music which is popular within the younger audiences. The main locations used in the documentary which are used include the shoots because it shows the main part of being a glamour girl. There are shots of the main office of the modeling agency to show what happens and what they do. ...read more.

This makes more of the younger viewers worry about what they look like because of the age of the models. Experts are used in the show because they tell you what you have to do to be a glamour model and give you an insight as to what it is like to be a glamour model. Because they are shown as the experts on the documentary, they are seen as trustworthy while being instructive. Glamour Girls, and other documentaries in the same style, are more acceptable for BBC3 to broadcast because of the audience which are more drawn to the channel. It is also seen as more of an entertainment rather than serious which is seen more on channel4. These types of programs have more fashion style images and themes. ...read more.