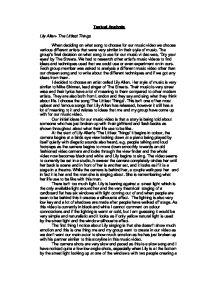 When deciding on what song to choose for our music video we choose various different artists that were very similar in their style of music. The group’s final decision on what song to use for our music video was, ‘Dry your eyes’ by The Streets. We had to research other artist’s music videos to find ideas and techniques used that we could use or even experiment on in ours. Each group member was asked to analysis a different music video other than our chosen song and to write about the different techniques and if we got any ideas from them.

I decided to choose an artist called Lily Allen. Her style of music is very similar to Mike Skinner, lead singer of The Streets. Their music is very street wise and their lyrics have a lot of meaning to them compared to other modern artists. They are also both from London and they say and sing what they think about life. I choose the song ‘The Littlest Things’. This isn’t one of her most upbeat and famous songs that Lily Allen has released, however it still has a lot of meaning to it and relates to ideas that me and my group have come up with for our music video.

Our initial ideas for our music video is that a story is being told about someone who has just broken up with their girlfriend and flash backs as shown throughout about what their life use to be like.

At the start of Lily Allen’s ‘The Littlest Things’ it begins in colour, the camera begins at a birds eye view looking down at a piano being played by itself quietly with diegetic sounds also heard, e.g. people talking and loud footsteps as the camera begins to move down smoothly towards an old fashioned video camera and looks through the view finder and the whole video now becomes black and white and Lily begins to sing. The video seems to currently be set in a studio, however the camera completely circles her until her back is scene and in front of her is another set, and it looks as if it is a stage in a theatre. While the camera is behind her, a couple walk past her and in fact it is her and the man she is singing about. She is remembering what her life use to be like with this man.

There isn’t too much light. Lily is leaning against a street light which is the only available light around her and the very theatrical staging of a cardboard flat has six windows with light coming out of and when people are seen to be behind this it creates a silhouette effect. The lighting is also very low key and a lot of shadows are made after people have walked off stage. As this video is currently in black and white I cannot comment on colour connotations and if the lighting is warm or cold, but I am guessing it would be very simple and naturalistic and it looks as if only yellow natural light is used by the street light and the window silhouette effect.

The first thing I notice about Lily singing is that she doesn’t show much emotion and this is one thing me and my group want to create in our video as we don’t want our main actor to show much emotion as he has just broken up with his partner similar to this storyline in this music video.

The camera shots are very slow and paced as this is a slow song and I have noticed quite a few low angle shots, especially when Lily is at the bottom by the street light looking up at one of the windows with two people creating a silhouette position, the camera looks as it is looking through her eyes and gradually looking up towards to window at herself as it is meant to be her and her past lover in this position.

Most of the scenes flow immediately into one another, however there is a turnover effect, giving the effect that a page is being turned over which is common with the wipe effect. This changes the effects a little as so far each scene has flowed into one another and has not been cut in anyway. This effect has been used to try and keep the flow of the shots but change the scene into the room where the silhouette couple are seen. After the turnover effect it seems as though the shot has been flipped into a mirror and as the camera zooms out of the mirror it gives the effect that another turnover effect has been used however it hasn’t and the camera now zooms into the couple.

A cut has now been introduced to completely change the scene however it does try to keep the flow of the song by the couple going into one position and the next scene they keep the same position.

There are a lot of long shots as this shows the staging and what location they are in. however I didn’t always understand why close up shots were sometimes used as Lily doesn’t show emotion in her face while singing the song.

There isn’t any obvious special effects used within this music video, however there is a scene where a slight effect is used. It doesn’t seem to be an on camera effect and is defiantly a post production effect and is computer generated. The camera zooms out from the shot and the lighting darkens and it is as though the curtains are being drawn or a theatrical scenery change, but it suddenly stops and it seems to mirror itself twice into one another and when the camera zooms back out is shows a painting on a wall and this indicates a scene change but still trying to keep the flowing effect of the video.

The shots seem to flow from present day to her past with her partner throughout the video, e.g. the flat scene to dance scene back to Lily looking up at the window on the street staging.

CGI is used again to carry on the flowing effect by having Lily by herself centre stage then giving the effect that her mirror image has flowed straight out of her and off stage. I feel CGI may not of been used and a double actor was used instead as the mirror image only shows the back of her. However CGI was defiantly used in the next section when the cardboard flat scenery seems to fall through her slowly making her disappear but reappear in the same position in a different costume when a black frame is lowered around her.

The use of shadows is used quite a few times and can be really effective especially with this video mainly being shot in black and white. This again has a silhouette effect to it with the two shadows of Lily and her partner in the past in a kissing position. Another effect similar to the painting on the wall effect is used again, however at first it looks as if the camera is focusing on Lily using a high angle shot looking outside a window, but the closer the camera gets it looks as though it is a painting of her and it splits into two as if it is a sliding door leading to something. The same image appears but instead of the shot being a long shot the camera now shows a close up and the same thing happens again with the image splitting into two only to show another image this time a big close up of the same image of Lily. These are the fastest camera shots throughout the video and do blend in well as nearly all the shots are very slow and flow very smoothly and this has a different effect to it.

The video finishes after this scene with a final image of Lily on the stage, close up with her looking emotionless at the camera. The camera then zooms back out of the view finder of the old fashioned camera, the scene now becomes colour again and the scene looks exactly the same as the beginning of the video and the camera finishes at a very high angle shot looking down at Lily and the set and crew members.

This music video does influence my group’s ideas in many ways even thought you would think Lily Allen’s other songs and videos to them link better with our chosen song, ‘Dry Your Eyes’. Even though this isn’t one of her most ‘street’ wise songs the story is what influenced us the most with it being a love story which is what ‘Dry your Eyes’ is based on. The expression she uses throughout also influences us because she doesn’t show any emotion because of the fact she is heart broken. Even thought we want to keep the ‘street’ feel to our video we are defiantly going to use techniques and some ideas from the story from Lily Allen’s video, and even though no over the top special effects were used I think it was a big success and is much more effect than if over the top effects were used.