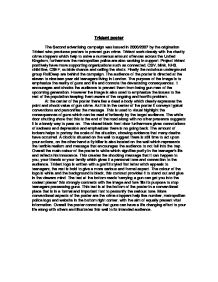 Trident poster The Second advertising campaign was issued in 2006/2007 by the origination Trident who produces posters to prevent gun crime. Trident work closely with the charity crime stoppers which help to solve a numerous amount offences across the United Kingdom, furthermore the metropolitan police are also working in support. Project trident positively have more supporting organizations such as connected, CSV, blink, NHS, child line, CSEF, outside chance and calling the shots. Finally the notorious underground group RollDeep are behind the campaign. The audience of the poster is directed at the eleven to nineteen year old teenagers living in London. The purpose of the image is to emphasize the reality of guns and life and connote the devastating consequences. ...read more.

This is used to visual highlight the consequences of guns which can be read effortlessly by the target audience. The white door shutting show that this is the end of the road along with no other presence suggests it is a lonely way to pass on. The closed black front door furthermore gives connotations of sadness and depression and emphasizes there is no going back. The amount of lockers helps to portray the scale of the situation, showing evidence that many deaths have occurred. A clock is situated on the wall to suggest there is still time to act upon your actions, on the other hand a fly killer is also located on the wall which represents the terrible realism and message that encourages the audience to not fall into the trap. ...read more.

The colour of the logo is white and the background is black, this contrast provides it to stand out and glue in the viewers mind. The text at the bottom reads 'carrying a gun can get you into the coolest places' this strongly contrasts with the image and fore fills its purpose to stop teenagers possessing guns. This text is at the bottom of the poster in a conventional place that is in a formal and important font to personify the serious tone. More conventional aspects of the poster are the crime stoppers help line number, metropolitan police logo and website in the bottom right corner, with the aim of equally present vital information. Overall the poster connotes that guns can have a life changing effect to your life along with others and illustrates this well to its intended audience. ...read more.