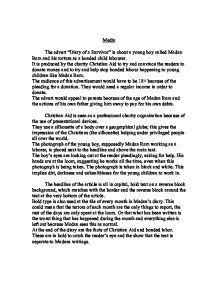 The advert &amp;#147;Diary of a Survivor&amp;#148; is about a young boy called Madan Ram and his torture as a bonded child labourer.

Media The advert "Diary of a Survivor" is about a young boy called Madan Ram and his torture as a bonded child labourer. It is produced by the charity Christian Aid to try and convince the readers to donate money and to try and help stop bonded labour happening to young children like Madan Ram. The audience of this advertisement would have to be 18+ because of the pleading for a donation. They would need a regular income in order to donate. The advert would appeal to parents because of the age of Madan Ram and the actions of his own father giving him away to pay for his own debts. Christian Aid is seen as a professional charity organization because of the use of presentational devices. They use a silhouette of a body over a geographical globe; this gives the impression of the Christians (the silhouette) helping under privileged people all over the world. The photograph of the young boy, supposedly Madan Ram working as a laborer, is placed next to the headline and above the main text. The boy's eyes are looking out at the reader pleadingly, asking for help. His hands are at the loom, suggesting he works all the time, even when this photograph is being taken. ...read more.

Madan Ram uses emotive language in his diaries to try to express to the reader how much pain and suffering he's had to go through. He uses: "My fingers crack and weep" This could mean that he weeps too, but he is too embarrassed to say. At the very last month Madan Ram tells us his dreams of growing up and paying off his fathers debt. He also wants to become a teacher, which is like any other child's dream. This shows us that Madan is a normal boy with thoughts and feelings. Christian Aid gives us statistics to prove to us that bonded child labor is an immense problem and more children like Madan put up with this torture. "15 million children still spend their entire childhood in bonded labor" The reader might feel that their own donation could help some of those children and would like someone to donate if their own children when in that position. They are therefore convinced to donate. The advert "this tube..." is about a disease called trachoma, which is common in the developing world. It is produced by the charity Sight Savers to try and convince the readers to donate money to help cure trachoma. The audience of this advertisement would probably be an older person, rather than children and teens. ...read more.

It gives the main facts about Sight Savers and their history. It has the title: "Delivery guaranteed" This suggests that the money donated to the charity will be used for the eye treatment only and not for other things like advertising and labor. The third section is very long. It has the title: "It costs as little as �1.20 to treat one person" This is straight to the point and is a condensed version of the whole paragraph; it is all the reader needs to know. All along the reader has been led to believe that they will only be asked for �1.20 but now they are asked to give a �12 donation as a gift to ten people. The advert now goes on to try and convince the reader to pay up. They use phrases like: "Wouldn't you?" And "If you..." They want to appeal to the audience and get them to put themselves in the position of a trachoma sufferer. In the last paragraph Sight Savers make their final plea. They keep it short and to the point: "Please Help" This is to show the reader that their help is wanted by both Sight savers and trachoma sufferers and that their money will be put to a good use. ...read more.