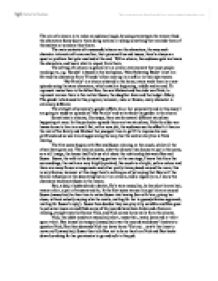 The aim of a sitcom is to make an audience laugh, by using stereotypes the viewer finds the characters funny due to them doing actions or saying something that reminds them of themselves or someone they know.

The aim of a sitcom is to make an audience laugh, by using stereotypes the viewer finds the characters funny due to them doing actions or saying something that reminds them of themselves or someone they know. The main contents of a successful sitcom are the characters, the way each character interacts with one another, their personalities and issues, there's always an upset or problem that gets resolved at the end. With a sitcom, the audience gets too know the characters, and know what to expect from them. The setting of a sitcom is generally in a similar environment that most people would go to, e.g. 'Scrubs' is based in the workplace, 'Men Behaving Badly' is set in a flat and the characters from 'Friends' either meet up in a caf� or in their apartments. 'My Family' is a sitcom situated in the home; every week there is a new episode using the same characters, which entails a beginning, middle and an end. To represent males there is the father Ben, the son Michael and the older son Nick, to represent women there is the mother Susan, the daughter Janie and the lodger Abbey. ...read more.

Ben, a dad, a husband and a dentist, He's very masculine, he has short brown hair, wears a shirt, a pair of trousers and tie. In the first scene we see him put his arm around Susan (masculine) he then tries to entice Susan into having Sex with him, giving her clues, without actually saying what he wants, waiting for her to guess(a famine approach, waiting for Susan's reply). Susan then decides they can play strip scrabble and Ben goes to put some music on and finds some of his records have been broke and others are missing, straight away he blames Nick, and Nick comes home early from the cinema. Nick, the eldest son(very masculine) short, messy hair, wears jeans and a t-shirt upon t-shirt. Ben looses his temper (masculine) over the records and doesn't hesitate to question Nick, Ben then demands Nick too leave home "Get out...now's the times to move out"(masculine). Susan then tells Ben not to be so harsh on Nick and Ben backs down by asking for her permission to go and sulk in the pub. ...read more.

She then hugs Nick(famine), Ben however, refuses to hug Nick(masculine) and smiles, helps him with the boxes and shuts the door before Nick can finish talking(masculine), The next couple of scenes tell the audience a lot about the gender in characters, Susan is in the kitchen cooking(famine), however she is a terrible cook(masculine), she is using a cookery book and manages to make a solid lemon sponge. Susan also is very restless in bed thinking about nick on his own(famine). Ben sits down and pores himself a glass of whiskey (masculine), relaxes in the peace. The viewers then see Nicks new flat, it's a complete contrast to the family home, burnt walls, dusty and dirty white doors, No carpet, it's very masculine. Susan goes in Nick's room and sits on his bed, and for the first time we see what it's like, and it looks like a reflection of the flat, just as bad and shows how masculine and how much that flat suits Nick. Most sitcoms have a beginning, middle and an end, end ...read more.