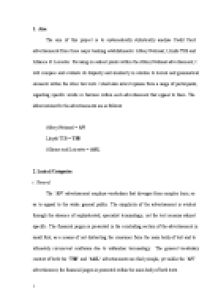 ﻿1. Aim The aim of this project is to systematically stylistically analyse Credit Card advertisements from three major banking establishments: Abbey National, Lloyds TSB and Alliance & Leicester. Focusing on salient points within the Abbey National advertisement, I will compare and evaluate its disparity and similarity in relation to lexical and grammatical elements within the other two texts. I shall also solicit opinion from a range of participants, regarding specific words or features within each advertisement that appeal to them. The abbreviations for the advertisements are as follows: Abbey National = AN Lloyds TSB = TSB Alliance and Leicester = A&L 2. Lexical Categories i. General The ?AN? advertisement employs vocabulary that diverges from complex lexis, so as to appeal to the wider general public. The simplicity of the advertisement is evident through the absence of sophisticated, specialist terminology, yet the text remains subject specific. The financial jargon is presented in the concluding section of the advertisement in small font, as a means of not distracting the consumer from the main body of text and to ultimately circumvent confusion due to unfamiliar terminology. The general vocabulary content of both the ?TSB? and ?A&L? advertisements are fairly simple, yet unlike the ?AN? advertisement, the financial jargon is presented within the main body of both texts. The ?AN? advertisement is written in an informal register; the second person personal pronoun ?you? is used fifty-one times within the main body of the text. This repetition suggests the advertisers endeavour to construct a rapport and connection with the consumer which would subsequently prompt the customer to apply for Credit. Specifically, the use of the pronoun ?you? forms the concept of personalisation, which furthermore has connotations of the exclusive consideration of the individual. Both the ?TSB? and ?A&L? advertisements have a differing degree of formality in relation to Abbey National?s attempt at promoting their Credit Card. ?TSB? appears to employ a fairy informal register, (the pronoun ?you? is used twice, and the pronoun ?your? is used three times) ...read more.

All adjectives employed are premodifiers, referent to either the products physical or evaluative attributes, these being: ideal, great, convenient, flexible, attractive, money-saving and simple. There is occasional use of adjectives within the ?TSB? advertisement; both ?flexible? and ?minimum? are used premodifiers, used to enhance product benefits. Similarly, the ?A&L? advertisement has the least occurrence of adjectives. ?Fantastic? is used to premodify ?savings? which emphasises advantageous elements of the product. All adjectives are gradable, in the sense that each can be modified by an adverb to convey a certain degree of intensity. However, in the instance of each advertisement, all adjectives stand alone, un-modified by an adverb so as not to overly assert the lexical semantic loading. With regards to the lack of adjectives across all three texts, it would be interesting to look at the similarity of the web-based advertisements in relation to the written leaflets. I entered each web-advertisement into a web-based corpus (Web 4) to discover whether, within the first ten most frequent words of each advertisement, there would be evidence of adjective use. Abbey National (Web 1) Lloyds TSB (Web 2) Alliance & Leicester (Web 3) Abbey Lloyds Credit months TSB Card Credit card account Card credit months petrol PLC banking new account purchases purchases financial Alliance Cards spend earn fee balance spend account current rate The only adjective that appeared was ?new? in the ?AN? web-advertisement, which appeared a total of six times within the text. This demonstrates that all texts are entirely concerned with not describing the product as a means of elevating its status but much more, stating factual, accurate information for the consumer. iv. Verbs The verb usage within the ?AN? advertisement carries an important part of the meaning of the text as a whole. The advertisement is effectively persuading you to apply for a credit card, which is an action. Therefore, verbs are used as a means of instigating this action. ...read more.

The pensioner felt drawn towards the ?AN? advertisement also, with regards to the individual attention the advertisement pays to the pronoun ?you.? Moreover, she also regarded the use of the phrase, ?a credit card to make your money to further,? as she felt that the card would facilitate her necessities. It was interesting that the participants did not select a word or feature from the ?A&L? advertisement; however, this may have been attributable to the quantity of financial jargon presented within the main body of text and its deficiency of personalisation. 6. Conclusion The primary aim of an advertisement is to successfully persuade the consumer to purchase the offered product. Generally, the overall effect of advertisements depends as much on the graphological design in addition to the lexical features. Furthermore, the integral aspect of the advertisement will effectively identify a subject which is congruent with substance of daily lifestyle and therefore relative to the consumer. In advertisements, it is important to discern reality from idealism, therein; words are often misused as a means of elevating the status of the obtainable product, and not necessarily as a means of deceiving the buyer. Advertisers endeavour to eliminate lexical constructions that are complex, therein; the sentences are marked grammatically, yet some sentences do not contain a full compliment of elements which accordingly, create a ?full sentence.? In relation to the three analysed advertisements there are aspects that are not completely concurrent with conventional features of advertisements, this being much owed to the excessive presentation of financial jargon in both the ?TSB? and ?A&L? advertisements. However, through stylistic analysis, the ?AN? advertisement appears to fully correspond to its aim, that being to instruct and persuade the consumer effectively and successfully. I believe that the ?AN? advertisement is most suited to readers who are less concerned with the financial jargon, but much more attracted to the beneficial components the lender has to offer. Both the ?TSB? and ?A&L? advertisements are more likely to attract a somewhat professional audience who are acquainted with financial terminology. ...read more.