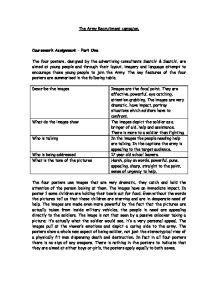 The Army Recruitment campaign. Coursework Assignment - Part One The four posters, designed by the advertising consultants Saatchi & Saatchi, are aimed at young people and through their layout, imagery and language attempt to encourage those young people to join the Army. The key features of the four posters are summarised in the following table. Describe the images Images are the focal point. They are effective, powerful, eye catching, attention grabbing. The images are very dramatic, have impact, portray situations which soldiers have to confront. What do the images show The images depict the soldier as a bringer of aid, help and assistance. There is more to a soldier than fighting. Who is talking In the images the people needing help are talking. In the captions the army is appealing to the target audience. Who is being addressed 17 year old school leavers. What is the tone of the pictures Harsh, play on words, powerful, puns, appealing, sharp, straight to the point, sense of urgency to help, The four posters use images that are very dramatic, they catch and hold the attention of the person looking at them. ...read more.

I don't think that the posters would appeal to the majority of 17-year old school leavers. I think that most teenage boys are excited by action and will not be attracted to the army through the idea of helping. Conversely I think that most teenage girls will be put off by the aggressive imagery seen on television etc. Coursework Assignment - Part Two The image we see displayed is of an Afro-Caribbean man which I think is very powerful and effective. The image takes up most of the poster and your eye is drawn to the man's face staring at you and his finger pointing at you. It is as though he is addressing you personally and not the population as a whole. The image grabs your attention and causes you to stop and read the text. The words used in the poster tell us that the army does not tolerate r****m, it shows that everyone is equal. The time when black people and people of ethnic minorities were treated less humanely than white people, is over, everyone is equal. Interestingly in using such language the army is accepting that racial harassment was a feature in the past. ...read more.

I felt that this had so much impact and people respected him, I wanted to repeat the impact for women. Women are traditionally seen as guardians of the home, cleaning, cooking and caring. I wanted the woman to say that she is proud to be a soldier, I hoped it would have the same effect as the caption on the Afro-Caribbean poster. When I wrote the message for my poster (the bold writing) I deliberately decided to use the second person pronoun 'you' as I think it makes the poster more personal. I wanted to target women as an individual, in my opinion it is a more direct way of getting the message across. I chose to use the terminology 'You can make a difference' because I wanted to send a challenge to the reader. Being in the Army is not an easy life, it is demanding and I intended to attract those women who are prepared to fight to make a difference. I chose to write the caption as though it came from a woman already serving in the Army, I think this has more impact than appearing to come from some disinterested person. I deliberately designed my poster to address all women, women who have just left school or women who just want a career change. ...read more.