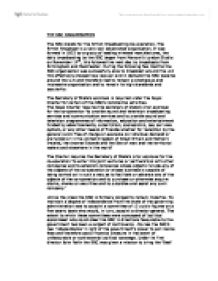 THE BBC ORGANISATION The BBC stands for the British Broadcasting Co-operation. The British Broadcast is a very well established organisation. It was formed in 1922 by a group of leading wireless manufactures, the daily broadcasting by the BBC began from Marconi's London Studio on November 14th, this followed the next day by broadcasts from Birmingham and Manchester. During the following few months the BBC organisation was successfully able to broadcast around the U.K this effectively showed how popular and in demand the BBC became around the U.K and therefore had to remain a prestigious and impressive organisation and to remain its high standards and popularity. The Secretary of State's approval is required under the Royal Charter for certain of the BBC's commercial activities. The Royal Charter requires the secretary of state's prior approval for the co-operation 'to provide sound and television broadcasting services and communication services and to provide sound and television programmes of information, education and entertainment funded by advertisements, subscription, sponsorship, pay per view system, or any other means of finande whether for reception by the general public free of charge or available on individual demand or encrypted or in the United Kingdom of Great Britain and Nothern Ireland, the channel Islands ...read more.

In contrast to channel 4, the BBC is less cutting edge, the BBC broadcasts programmes that are usually v. The BBC abides by the rule of remaining impartial, channel 4 broadcasts programmes that would not be shown on the BBC as many programmes do no remain politically lawful, for example, the conspiracies of 9/11 was broadcasting on channel 4, it was as insight into what the programme makers believed to have happened therefore the BBC didn't broadcast this biased programme that criticized the American and British Public. As the generations have progressed the BBC targets and attracts a wider audience with the aid of many subsidiaries enabling wider target audiences therefore increasing the popularity and remaining at a high status broadcasting co-operation. The BBC encourages a wider audience by introducing subsidiaries Cbeebies for younger children, News 24, CBBC, BBC3, BB4, they have also introduced print as a subsidiary. The advantages of having many subsidiaries are that they reach audiences in very different unique ways. People who may not have time to watch the news on television or blind people will chose to listen to the radio instead. ...read more.

In all the media industries, a few large companies control a sizeable share of the market. When these companies own shares in several media sectors and on an international scale, they're referred to as multimedia conglomerates. The BBC organisation is very traditional and is well established. Its genre is very much the 'British Culture' to attract and target the British audience as well as successfully targeting the different genders and cultres. Being politically impartial and respecting the government and being very patriotic will connote a very British feel. The BBC is easily available around the world by the successful use of platforms, internet, etc. The BBC is well established and is well respected within the media. Twelve governors ensure the BBC is run in the interest of the viewers and listeners. * They act as trustees of the public interest and ensure that it fulfils its obligations. * They're appointed by the Queen on the advice of the government ministers. * Day to day operations are run by sixteen divisions. Their directors report to the director general, forming the executive Board. * It answers to the Board of Governors. Each divisions performance is regualarly assessed by the BBC's Governors, an advantage to the assessment is that, problems can be learnt from therefore creating a better chance of gaining a larger target audience. ...read more.