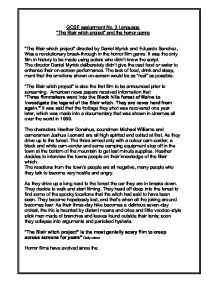 GCSE assignment No. 3 Language "The Blair witch project" and the horror genre "The Blair which project" directed by Daniel Myrick and Eduardo Sanchez, Was a revolutionary break-through in the horror film genre. It was the only film in history to be made using actors who didn't know the script. The director Daniel Myrick deliberately didn't give the cast food or water to enhance their on-screen performance. The lack of food, drink and sleep, ment that the emotions shown on-screen would be as "real" as possible. ...read more.

It was said that the frottage they shot was recovered one year later, which was made into a documentary that was shown in cinemas all over the world in 1999. The characters Heather Donahue, soundman Michael Williams and cameraman Joshua Leonard are all high spirited and exited at first. As they drive up to the forest. The three armed only with a colour cam-corder, a black and white cam-corder and some camping equipment stop off in the town at the bottom of the mountain to get last minute supplies. ...read more.

They decide to walk and start filming. They head off deep into the forest to find some of the spooky locations that the witch had said to have been seen. They become hopelessly lost, and that's when all the joking around becomes fear. As their three-day hike becomes a delirious seven-day ordeal, the trio is haunted by distant moans and cries and little voodoo-style stick men made of branches and leaves found outside their tents; soon they collapse into arguments and panicked hysteria. "The Blair witch project" is the most genially scary film to creep across screens for years" Daily mirror Horror films have evolved since the ...read more.