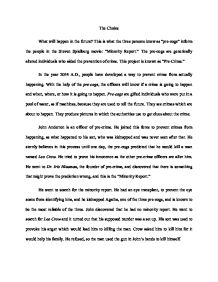 What will happen in the future? This is what the three persons know as “pre-cogs” inform the people in the Steven Spielberg movie: “Minority Report.” The pre-cogs are genetically altered individuals who aided the prevention of crime. This project is known as “Pre-Crime.”

In the year 2054 A.D., people have developed a way to prevent crime from actually happening. With the help of the pre-cogs, the officers will know if a crime is going to happen and when, where, or how it is going to happen. Pre-cogs are gifted individuals who were put in a pool of water, as if machines, because they are used to tell the future. They see crimes which are about to happen. They produce pictures in which the authorities use to get clues about the crime.

John Anderton is an officer of pre-crime. He joined this force to prevent crimes from happening, as what happened to his son, who was kidnapped and was never seen after that. He sternly believes in this process until one day, the pre-cogs predicted that he would kill a man named Leo Crow. He tried to prove his innocence as the other pre-crime officers are after him. He went to Dr. Iris Hineman, the founder of pre-crime, and discovered that there is something that might prove the prediction wrong, and this is the “Minority Report.”

He went to search for the minority report. He had an eye transplant, to prevent the eye scans from identifying him, and he kidnapped Agatha, one of the three pre-cogs, and is known to be the most reliable of the three. John discovered that he had no minority report. He went to search for Leo Crow and it turned out that his supposed murder was a set-up. His son was used to provoke his anger which would lead him to killing the man. Crow asked him to kill him for it would help his family. He refused, so the man used the gun in John’s hands to kill himself.

In the end, it was his superior, Lamar Burgess, who was responsible for the set-up, and for killing Crow and Agatha’s mother. It was predicted that Lamar would kill John Anderton. He actually committed suicide.

“Minority Report” is a science fiction movie and shows what we would probably do to solve crime in the future. Spielberg splurged on everything in this movie. We can see hi-tech computers, cars, even newspapers move and tell you the latest news which just happened a few moments ago. The effects were outstanding. It gives us a glimpse on what we could possibly but unlikely have in 2054.

These people see the future through pre-cogs, who can be considered as “psychics” for they can say what is going to happen. The people depended on the pre-cogs about the future. They totally relied on what they say and do their actions according to what the pre-cogs have predicted. A ball would come out of the tube with a name carved on it, indicating whether he is the victim or the suspect. These balls define the future of those people. They say if you will get killed, or if you will kill someone. These balls are like the masters of the pre-crime officers. We can see the power that a carved ball can do to a human being. It is like these balls are over the people. They command, and the people merely obey.

Yes, people have invented a way to somewhat minimize or maybe even eliminate crime in the world. But can we really tell the future? What if the suspect changed his mind and decided not to do it? What if he tripped and falls off a building? What if he finds pity in the victim and just decided to go home but the balls still say he killed the guy?  There are so many what if’s in this movie. The main point is that we can never really tell one’s future or what will happen to you and your decisions. No man has the right to predict what will happen to you, much more a ball. We are the ones responsible for our own destiny. We can change. We can choose.

Some people get saved. Some people get punished. Some are trapped in the pool of water producing some balls for everyone to see. It is very dehumanizing to not have your own choice. The pre-cogs have to stay there until people snap out of their twisted minds and see that they are not machines, but human beings. They have a life to live, and it is not supposed to be like this. The suspects get punished even though they still have a choice to continue or not. They are punished about crimes which in reality, they have never committed.

Is pre-crime really successful? Does it actually work for the better? Or is it just another way of people altering their lives and changing it to whatever they want? Pre-cogs or no pre-cogs, we still have a choice.