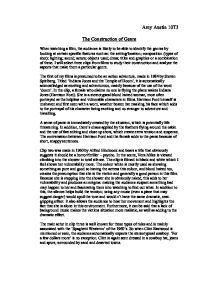 The Construction of Genre

Amy Austin 10T3 The Construction of Genre When watching a film, the audience is likely to be able to identify the genres by looking at certain specific features such as: the setting/location; composition (types of shot); lighting; sound; actors; objects used; dress; titles and graphics or a combination of these. I will select three clips from films to study their construction and analyse the aspects that make them a particular genre. The first of my films is presumed to be an action adventure, made in 1984 by Steven Spielberg. Titled 'Indiana Jones and the Temple of Doom', it is automatically acknowledged as exciting and adventurous, mainly because of the use of the word 'doom'. In the clip, a female who claims no one is flying the plane wakes Indiana Jones (Harrison Ford). She is a stereotypical blond haired woman, most often portrayed as the helpless and vulnerable characters in films. ...read more.

The colour white is mostly used as showing something as pure and good so having the actress this colour, and blond haired too, creates the presumption that she is the victim and generally a good person in this film. Because she is stepping into the shower she is obviously naked, this adds to her vulnerability and produces an enigma: making the audience suspect something bad may happen to her and fascinating them into watching to find out what. In addition to this, the silence helps build the tension; using any music (even a piece that may suggest danger) would spoil the tone and wouldn't have the same dramatic, seat-gripping effect. It also allows the audience to hear her movement and highlights the fact that she is alone in this environment. Furthermore, it can be said that a lack of background music makes the victims situation more realistic, as well as adding to the dramatic effect. ...read more.

Clint Eastwood, on the other hand, sports chiselled features and a sense of 'cool', naturally radiated by a lead role or hero. He is, nevertheless, a character that appeals to everyone: women want him and men want to be him, however stereotypical that may sound. The first two clips chosen suggest the genre or the film from the title. The initial impressions are reinforced when studying the scenes: the mayhem in clip one and the way the character (Indiana Jones) is dressed confirms the adventurous theme; the vulnerability and suspense portrayed in clip two adds to the idea that this is a thriller. The genre of the third clip is not identifiable from the title but is instantly recognisable as a western from the setting and the dress or the characters. It is not just one factor that places a film in a certain genre or another. Sometimes a viewer must look at a combination of points, such as those mentioned in the opening paragraph, before the genre can be identified. ...read more.