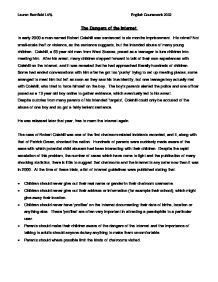 The Dangers of the Internet

The Dangers of the Internet In early 2000 a man named Robert Colehill was sentenced to six months imprisonment. His crime? Not small-scale theft or violence, as the sentence suggests, but the intended abuse of many young children. Colehill, a 53 year old man from West Sussex, posed as a teenager to lure children into meeting him. After his arrest, many children stepped forward to talk of their own experiences with Colehill on the Internet, and it was revealed that he had approached literally hundreds of children. Some had ended conversations with him after he got too 'pushy' trying to set up meeting places, some arranged to meet him but left as soon as they saw his true identity, but one teenage boy actually met with Colehill, who tried to force himself on the boy. The boy's parents alerted the police and one officer posed as a 13 year old boy online to gather evidence, which eventually led to his arrest. Despite outcries from many parents of his intended 'targets', Colehill could only be accused of the abuse of one boy and so got a fairly lenient sentence. He was released later that year, free to roam the Internet again. ...read more.

State where she lived: North Carolina. Hobbies: softball, chorus, skating and going to the mall. Besides this information he knew she lived in Canton. She had just told him. He knew she stayed by herself until 6:30 every afternoon until her parents came home from work. He knew she played softball on Thursday afternoons on the school team and the team was named the Canton Cats. Her favourite number seven was printed on her jersey. He knew she was in the seventh grade at the Canton Junior High School. She had told him all this in the conversations they had on line. He had enough information to find her now. "She'll be so surprised," he thought, "she doesn't even know what she has done." ... ...Shannon was in her room after her softball game next Thursday evening when she heard voices in the living room. Shannon, come here," her father called. He sounded upset and she couldn't imagine why. She went into the room to see a strange man sitting on the sofa. "This man is a policeman. He has just told us a most interesting story about you." her father began. Shannon moved cautiously to a chair across from the man. ...read more.

It is being proposed that the 'grooming' of young children on the Internet become a criminal offence so that paedophiles, like Robert Colehill, who approach many children until one is na�ve enough to agree to meet them, can be convicted without actually physically having to harm children. This also removes the common concept that young teenagers can consent to engaging in s****l acts with adults. The unfortunate reality, however, as the statistics prove, is that as long as children continue to keep their parents in the dark about what is going on, little can be done. Why I chose to write on this subject I spend lots of time on the Internet, and ever since we got a computer my parents have been worried about the type of people I am talking to. I heard the university statistics given weeks ago and was shocked by the scale of this problem, especially when compared with the number of my friends who call me paranoid, give out their mobile numbers freely and seem completely unaware of the dangers facing them. I decided that this would make an good topic for further research, and it has proved to be very interesting. And although some of the information I found about the content of websites and various cases have been quite distressing, it really drove the point home to me. Lauren Barnfield L5% English Coursework 2002 ...read more.