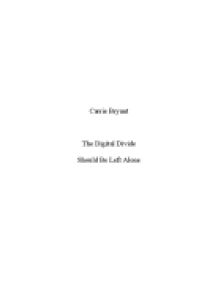 The Digital Divide refers to the gap between individuals with access to information technology and those with ineffective or no access.

﻿Carrie Bryant The Digital Divide Should Be Left Alone Technology has certainly made giant strides throughout the past few decades. Although it might be harder for the younger generation to comprehend, a large amount of people remember life before computers and the World Wide Web. Yes, there once was a time when thank you cards were sent only through the postal service and students had no other choice but to do their research using books. Not everyone has jumped on the internet highway though. Whether it is due to a lack of finances, lack of availability, lack of need or simply a lack of desire there are plenty of individuals living life happily without computers and/or the internet. There is a debate pertaining to the existence or non- existence of The Digital Divide. Simply put, The Digital Divide refers to the gap between individuals with access to information technology and those with ineffective or no access. Having ?access? is not limited to only physical access of technological means but also being able to access the skills and knowledge needed to effectively participate in our digital world. ...read more.

Perhaps the American government did not take every variable into account back in the late 90?s; if they did; they certainly did not make us aware. Education was the catalyst for promoting the internet to the American public. There is an abundance of information at your fingertips and it is so convenient to find. I have always remembered a saying from an early age which is, ?just because you read it in print does not make it true?. This saying fits perfectly when discussing the web. Anyone in this world has the ability to display whatever they wish to even if it is inaccurate and incorrect. Sometimes it can be tricky to weed out what information is true or false. As wonderful as it is to be able to find a slew of data in a matter of seconds the accuracy of that data is almost always in question. Crime has taken on a whole new persona since it stepped into our computers. Now citizens have to worry about crimes against them in the real world as well as the virtual world. ...read more.

Getting online to check your email, social media site and play games is very common. In fact, many students have actually had their productivity and grades drop because instead of using the internet for education and school they are chatting away and being social. If education was the main reason that Americans should get online then the government has already wasted their time. Knowledge and wisdom seem to have taken a backseat to posting what you are about to order for dinner and how handsome your waiter is. This Digital Divide that people may believe is a big crisis is not the only division that people have seen. Since the dawn of time there have been divisions between people for one reason or another. The world has only operated with computers present for a short amount of its time and it would continue to operate if the internet ceased to exist. There is obviously a very big part of us that is technological but we are still in the real world. It is not a division of just digital or not; it is a division of finances, society and education. Just because the government jumps in does not mean there will be any changes or improvement. ...read more.