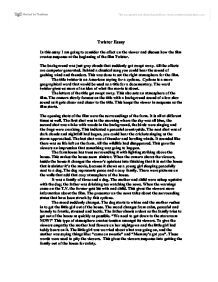 Twister Essay In this essay I am going to consider the effect on the viewer and discuss how the film creates suspense at the beginning of the film Twister. The background was just grey clouds that suddenly got swept away. All the effects are computer generated. Behind a classical song you could hear the sound of gushing wind and thunders. This was done to set the right atmosphere for the film. The title twister is an American saying for a cyclone. Cyclone is a more geographical word that would be used as a title for a documentary. The word twister gives us more of an idea of what the movie is about. The letters of the title get swept away. This also sets an atmosphere of the film. The camera slowly focuses on the title with a background sound of a low slow sound as it gets closer and closer to the title. This keeps the viewer in suspense as the film starts. The opening shots of the film were the surroundings of the farm. It is all at different times as well. ...read more.

"We need to get down to the storeroom NOW!" This type of atmosphere creates tension amongst its viewers. To give the viewers empathy the mother had flowers on her nightgown and the little girl had teddy bears on it. The little girl was worried about what was going on, and the mother was saying things like: "come on sweetie" and "Mummy's got you". These words were used to pity the viewers. This gives the viewers suspense into getting the family out of the house for safety. The father rushed them to the storeroom. The trees were falling behind them leaving the dog behind. As they were rushing to the storeroom they were passing a toy tractor. This would make the viewers think about the playful child that might not live through the big storm. Just as they left the house the camera focused on the television telling people in that area to find shelter. As they were running to the storeroom the camera focused on the trees falling down on to cable wires and storage tanks. On the side of the storage tanks they said express oil LTD. ...read more.

The door was shaking violently and there were loud thunders that sounded like growls. This made it seem as if they were trapped and nowhere to go and the dark side was trying to get in scratching, pulling at the door. The father was holding the door, but the hinges were about to come off. He shouted, "I can't hold it any more!" As it got louder and louder as the eye of the storm was getting closer and closer. He said this several times. This was to keep the viewer in suspense because they knew the door could come off at any moment. As he was saying this, the lighting was giving the room a short burst of light. This film creates a lot of suspense. This is done to keep the viewer interested throughout the whole film. In a review of the film it was described as only one word, "Intense". The films effects were very unrealistic according to geologists. Unlike some films twister got right to the point. Every cyclone they predicted they were correct. In real life you miss more cyclones than you encounter them. I think the suspense and distress was the key thing in the film and without it, it would be a very successful movie. By Danny Walker ...read more.