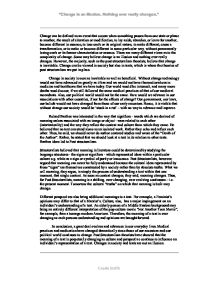 The effects of change?

Change can be defined as an event that occurs when something passes from one state or phase to another, the result of alteration or modification, to lay aside, abandon, or leave for another, become different in essence; to lose one's or its original nature, to make different; cause a transformation, or to make or become different in some particular way, without permanently losing one's or its former characteristics or essence. There are many different views as to the complexity of change. Some may believe change is an illusion and nothing ever really changes. However, the majority, such as the post structuralism theorists, believe that change is inevitable. Change can be viewed in society but also in texts, which is where the theories of post structuralism are put in place. ...read more.

Roland Barthes was interested in the way that signifiers - words which are derived of meaning unless associated with an image or object - were related to each other (intertextuality) and the way they reflect the context and culture from which they came. He believed that no text can stand alone as an isolated work. Rather they echo and reflect each other. Thus, he said, we should never do author centered studies and wrote of the "Death of the Author". Rather, he stated that we should look at a text in its relation to other texts. Barthes ideas led to Post structuralism. Structuralists believed that meaning in literature could be determined by studying the language structures - the signs or signifiers - which represented ideas within a particular culture e.g. ...read more.

For example, a Feminist's opinions may differ to that of a Marxist's. Culture, also, has a major impingement on an individual's understanding of a text. An elderly person of a Middle Eastern background may bring an entirely different interpretation of the pop-culture movie 'Not Another Teen Movie", for example, than a teenage modern American. Therefore, the meaning of a text is ever changing as each persons understanding and opinions are brought forward. In conclusion, a great deal evolves and advances in our everyday lives. Medical practices and medication have changed dramatically since those of our ancestors and our political world continues to change. Post Structuralism theorists have showed that the meaning of a text is perpetually changing as culture and perspective continue to influence an individual's representation of a text. Changes in society and texts are not an illusion. "Change is an illusion. Nothing ever really changes." Cassie Smith ...read more.