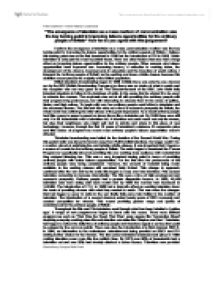 The emergence of television as a mass medium of communication was the key turning point in improving leisure opportunities for the ordinary people of Britain - How far do you agree with this judgement?

Sky television aim to simply satisfy the desires of the viewing public. This accounts for Sky's strong emphasis on sport and films. At the beginning of the twentieth century, most ordinary people had little time or money that they were able to spend on leisure opportunities. The average working class male was working a 10-hour day, 6 days a week. Working class women would spend the majority of their time completing household chores. The beginning of the twentieth century was an age before electricity was widely available and as a result the methods used by women to cook and clean were slow and took a lot of hard work. Workers that were unionised and politically aware such as shop owners, engineering workers and factory workers often achieved mildly better conditions. This would usually only entail a small reduction in the number of hours worked each day and maybe Saturday afternoons off. Wages were also incredibly low. The average wage for a shipbuilder in the 1900s would be �3 a week. The ordinary people of Britain had little demand for an increase in leisure opportunities, as they had neither the time nor the money to spare. ...read more.

For this reason, I think the invention of youth culture was also a very important cause. However, Youth culture is only a small section of society and I'm evaluating the improvement of leisure opportunities for all ordinary people including all ages. I believe that television provided the key turning point in improving leisure opportunities for the ordinary people of Britain. The point at which television had most impact entertainment was not its emergence as a major source of communication in 1936. The rise of television followed its realisation that it was necessary to provide the viewing public with what they wanted to see. This realisation resulted with television emerging as a form of mass communication as it began to reach the majority of ordinary people. Whilst increasing income, a reduction in working hours, the development of the cinema, the invention of youth culture and improvements in education all affected leisure opportunities none have been so significant as the emergence of television. Television has played the key role over the last 50 years in terms of reflecting the values established in the 1950s and the cultural changes that took place after the war. As a result television is now the most popular form of entertainment for the ordinary people of Britain with over 95% of households owning a television set. ...read more.