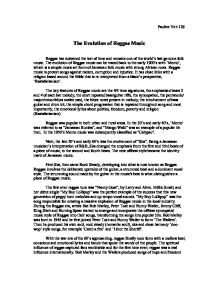 The Evolution of Reggae Music

Pauline Yeh 12S The Evolution of Reggae Music Reggae has sustained the test of time and remains one of the world's last genuine folk music. The evolution of Reggae music can be traced back to the early 1900's with 'Mento', which is a simple music art form of Jamaican folk music with strong African roots. Reggae music is protest songs against r****m, corruption and injustice. It has close links with a religion based around the Bible that is re-interpreted from a black's perspective, 'Rastafarianism'. The key features of Reggae music are the 4/4 time signatures, the emphasised beats 2 and 4 of each bar melody, the short repeated bass/guitar riffs, the syncopation, the pentatonic/ major/minor/blues scales used, the blues notes present in melody, the involvement of bass guitar and drum kit, the simple chord progression that is repeated throughout song and most importantly, the emotional lyrics about politics, freedom, poverty and religion (Rastafarianism) Reggae was popular in both urban and rural areas. In the 30's and early 40's, 'Mento' was referred to as "Jamaican Rumba", and "Mango Walk" was an example of a popular hit then. ...read more.

During the Reggae era, artists like Bob Marley, Peter Tosh and Bunny Wailer, Jimmy Cliff, King Stich and Burning Spear started to emerge and incorporate the offbeat syncopated music style of Reggae into their songs, transforming the songs into popular hits. Bob Marley was born in 1945 and he first joined Peter Tosh and Bunny Wailer to form 'The Wailers'. Then he produced his own soul, rock steady (romantic soul), ska and close harmony 'doo-wop' style songs, for example 'Catch a fire' and 'I shot the Sheriff'. With the war era of the 60's approaching, reggae finally took form with a mellow beat, conscious and emotional lyrics and bands that spoke the words of the people. The spiritual influence of reggae captured fans worldwide and for the first time ever; reggae was a real influence internationally. Bob Marley and the Wailers produced songs of hope and freedom that related to the wars happening between Vietnam. The song "War" by Bob Marley and the Wailers impacted the world. These reggae musicians were the deliverers of native Jamaican music to the worldwide audience, sharing its significant and emotional messages of social change and love throughout the world. ...read more.

Shabba Ranks became the first dancehall artist to sign a major contract. This triggered the rebirth of Reggae music in the US and Europe. As a result, manufactured groups such as Jamericans came about. Cobra, Lady Patra, Tiger, and Richie Stephens all signed with major labels during this era. Nevertheless, Reggae was about to take another turn in its rapid state of evolution. The 90's rolled in with the Japanese discovering Reggae, Yami Bolo was made a legend in Japan for his Reggae music. Mystic Revellers, Tiger, Beenie Man and Bounti Killa emerged not long after Yami Bolo. During the mid 90's, dancehall down surged in popularity but it was Beenie Man and Bounti whowere responsible for bringing it back to the industry. Now, it is a new era and a new millennium. Potential Reggae musicians are all around, with Mr Vegas, Mr. Lex, Morgan Heritage, Sizza, Tony Curtis, Singing Melody and many more who will definitely be around in the near future. The messages and meanings that Reggae music possess have made it one of the last, most authentic folk music in the world and this next generation of musicians have a bright future ahead of them, transform their Reggae music careers into immense success. ...read more.