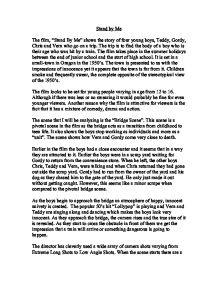 The film, &amp;#147;Stand By Me&amp;#148; shows the story of four young boys, Teddy, Gordy, Chris and Vern who go on a trip. Thetrip is to find the body of a boy who is their age who was hit by a train. Thefilm takes place in the summer holidays between t...

Stand by Me The film, "Stand By Me" shows the story of four young boys, Teddy, Gordy, Chris and Vern who go on a trip. The trip is to find the body of a boy who is their age who was hit by a train. The film takes place in the summer holidays between the end of junior school and the start of high school. It is set in a small-town in Oregon in the 1950's. The town is presented to us with the impressions of innocence yet it appears that the town is far from it. Children smoke and frequently swear, the complete opposite of the stereotypical view of the 1950's. The film looks to be set for young people varying in age from 12 to 16. Although if there was less or no swearing it would probably be fine for even younger viewers. Another reason why the film is attractive for viewers is the fact that it has a mixture of comedy, drama and action. The scene that I will be analysing is the "Bridge Scene". This scene is a pivotal scene in the film as the bridge acts as a transition from childhood to teen life. It also shows the boys stop working as individuals and more as a "unit". The scene shows how Vern and Gordy come very close to death. ...read more.

As the comb falls the film is cleverly slowed down to make it seem like it is taking almost minutes to reach the water. This adds to the tension by showing if the worst came to the worst there would be no chance in jumping to the river below, as they would die. The drama really begins to build up when an Extreme Long Shot shows the smoke of the train. This shot shows the train through the eyes of Gordy. A Close Up of Gordy is shown in slow motion showing him shouting "train" and warning the others. This is clever as it shows the fraught danger multiply by the inclusion of a large black steam train. Once the train is made obvious to the audience another Extreme Long Shot is shown showing Gordy and Vern, who were quite far behind Teddy and Chris, only half way across the bridge with the train getting closer and closer to them. The camera is tracking Vern and when he falls it stops with him. When Vern gets to his feet again the camera shows a Long Shot with him at the front and the train behind him. The train looks closer than it actually is by using this type of shot. The director keeps switching between the Extreme Long Shot and the Long Shot. This prepares the audience for a disastrous event in the near future. ...read more.

Around and before the bridge there is the brown of the bark and the green of the beautiful healthy looking leaves, plants and other shrubbery. On the bridge the natural look continues with the green and turquoise looking water. The metal, modern for the time, looking bridge blends in well with the landscape. As the train appears the natural beauty of the area begins to end. Usually trains billow white, cloud like "smoke" which is actually water vapour, yet in this scene the train appears to billow a dark shade of grey smoke which adds to the darkness of the train. The clothes that Vern and Gordy are wearing contrast the dark black of the impeding train. Again to add to the black of the scene the train looks to have been freshly painted black. This makes it look tougher and more "scary". An accumulation of all these effects show near death in a better way than if the train was white for example. The director has shown great use of creating tension on the bridge scene. The main part of this scene is when the train is following Vern and Gordy. He or she does this well by filling the whole screen with the black. I think that the scene is very well put together and good usage of natural light and colours are used. Although it is not that noticeable if you are not specifically looking at this one scene. Yet if the director didn't use natural effects it probably would be noticeable. By Philip Jacobs ...read more.