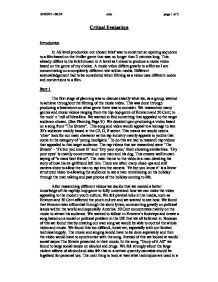 The first stage of planning was to discuss exactly what we, as a group, wanted to achieve throughout the filming of the music video

Critical Evaluation Introduction In AS level production our chosen brief was to construct an opening sequence to a film based on the thriller genre that was no longer than 2 minutes long. This already differs to the brief chosen in A level as I chose to produce a music video based on the genre of my choice. A music video differs greatly to a film as I am concentrating on a completely different text within media. Different acknowledgement had to be considered when filming as a video uses different codes and conventions to a film. Part 1 The first stage of planning was to discuss exactly what we, as a group, wanted to achieve throughout the filming of the music video. This was done through producing a brainstorm on what genre there was to consider. We researched many genres and music videos ranging from the hip-hop genre of Eminem and 50 Cent; to the rock' n 'roll of Metallica. We wanted to find something that appealed to the target audience chosen. (See Planning Page 9.) We decided upon producing a video based on a song from "The Streets". This song and video would appeal to a teenage to late 20's audience mainly based in the C2, D, E sector. This means we would need a 'chav' look for our main character as the rap industry mainly appeals to youths that come in the category of 'young hooligans.' ...read more.

This allowed the audience to see equal sides to the political issues and see who would win the argument in the end. We used a can of Carling to signify the use of alcohol and uses herbs that looked like skunk to reveal the use of cannabis. This allowed us to make it obvious to the audience what it was the characters were taking. We also managed to use some editing techniques during the video to enhance meaning. Because one of the characters was 'stoned' he would have been looking at the world in a hazy manor so we paned the camera in a cyclical motion toward the character. After our final edit we were left with our video which was approximately 2 and a half minutes long Part 2 We feel that this video would have been very appealing to our setr audience. I have already said that we proposed our video to appeal to a youth audience. In creating the song about drugs and alcohol we were already half way there. The next step was to produce camera angles and editing techniques that te youth would like. The youth culture in today's society has based a lot of its interest in artists such as Eminem or 50 Cent so the research created on these artists helped greatly. We found from there videos that they produced concentrated on their structuralism so we dedicated a lot of time to this. ...read more.

There are political issues that we also relate to, such as r****m, where it can be said that the alcoholic is r****t as he picks on an Asian man. These political issues or not supported in the video as the audience should end up hating the alcoholic because of his violent temper. We relate our video to many of The Streets own videos as it does produce a story narrative and we do use humorous techniques such as the use of my b*m in one scene. This allows the audience to have a humorous escape whilst also being presented with serious social and political views. We feel that our video would be shown on many of the Sky/Telewest music channels. Channels such as MTV Base and the U Channel will be in common use because these channels have a reputation for producing and viewing videos that consist of rap. It is not only music videos where my music video would appear. There are many other places that my video can be seen. Some artist often promote there videos on Talk Shows and there they often play live. This would promote the video to allow a specific audience to see it. I may also put an advert on T.V. Most noticeably the music channel adverts as it would be music channel viewers who would be interested in my work. ?? ?? ?? ?? 10/05/07 - 00:39 994864VWARD page 1 of 3 ...read more.